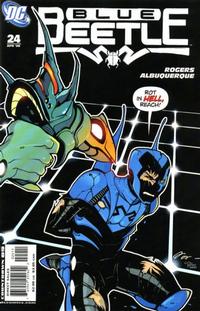 I'm trapped on an alien spaceship, and I have no powers. But I'm the Blue Beetle. And the thing about us Blue Beetles... we don't need no stinking powers.

There are 21 pages of comic, ignoring the adverts and DC Nation. Panels are counted from the top down, left to right.

Retrieved from "https://heykidscomics.fandom.com/wiki/Blue_Beetle_Vol_7_24?oldid=1415462"
Community content is available under CC-BY-SA unless otherwise noted.