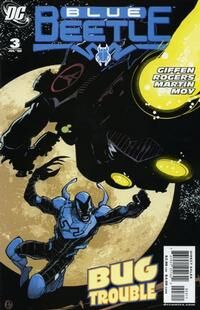 Appearing in "The Past Is Another Country"Edit

Synopsis for "The Past Is Another Country"Edit

Morning: After he beats the crap out of two guys that attempted an armed robbery at the Sunco station. The heavily tattooed man got a friend in the area an after he bought a beer he drivers of on his motorcycle.

Jaime is still busy explaining his one year absence to his family he goes even so far as to fire his armor in front of them. The gross display has not the wanted display as his little sister Milagro runs outside in horror. His mother lashes out verbally to her son believing him to be an impostor. As she runs after her daughter, Jaime has a talk with his father. He explains they thought he was dead and that his wife needs sometime to get that anger out of her system. He ignores Jaime's question why he walks with a cane and tells him he will call when it is time to get home.

Once outside Jaime starts experimenting with the armor and discovers it is able to make cloths and locate everyone he met after the scarab got into him. He locates Paco who is accompanied by Damper at the border and are attacked by La Dama's tugs. The tugs pose no problem for Jaime who has more trouble keeping the scarab from killing. He grabs Paco and flies him to mexico and has more luck explaining his absence to his friend then it was to his family.

Paco tells Jaime that after he left Brenda was hit so hard by her father she almost died and was send to the hospital and that a week later her father died in a Dui. She lives now with her aunt. Brenda herself can't believe her eyes when Jaime returns and stomps him in the stomach and hugs him. In the shadow La Dama requests that staff treads Brenda's friends well

Retrieved from "https://heykidscomics.fandom.com/wiki/Blue_Beetle_Vol_7_3?oldid=1415480"
Community content is available under CC-BY-SA unless otherwise noted.