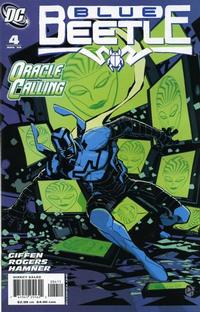 Break him. If he's not strong enough to survive you, he's useless to me anyway.

Appearing in "Person of Interest"Edit

Synopsis for "Person of Interest"Edit

Oracle hacks into Jaime's computer as he was doing research on the Blue Beetles before him. She makes him an offer to join the Birds of Prey. But he refuses, accusing Batman and his fellow heroes of abandoning him when they were done with Brother Eye. In the end the shadowy genius mastermind behind the world's greatest heroes fails to recruit a sixteen-year old boy.

Sometime later his mother has him X-rayed at the local Medic Center but no trace of the Scarab can be found on the test, unknown to them a heavy tattooed man on a motorcycle seems to notice Jaime's unusual condition.

As Brenda plans to hang out with Jaime and Paco after school. Her aunt make arrangements for the Diviner to test and recruit the new Blue Beetle to her cause. But the right moment wouldn't come that soon as La Dama's niece was with him. In the end he decides to go on with his plan of "rescuing" the pretty niece in the process.

When Jaime hangs out with his friends he discovers his new fame at school as the "one year later kid" and the truth about his father's condition, he was shot after he tried to protect Luis Rivas. At that time the Diviner begins and summons two Ents, but to his dismay he learns the Blue Beetle can disrupt magic and dispels his creations. Beaten up undiscovered the Diviner gets a feeling his boss will not be pleased about this result.

Jaime is starting to get tired of his super hero business and as he wants some answers. He asks Paco to arrange a meeting with the Posse for him.

Retrieved from "https://heykidscomics.fandom.com/wiki/Blue_Beetle_Vol_7_4?oldid=1415444"
Community content is available under CC-BY-SA unless otherwise noted.