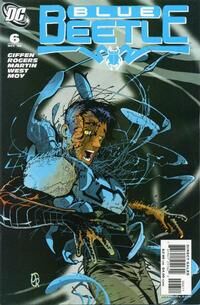 Betting they don't know about the surprises inside the compound. Should keep things lively.

Outside of El Paso Peacemaker tracks the Blue Beetle discovers a fried sensor and jeep tracks. He smiles, knowing there is at least one in Jaime's group who thinks it through. And follows them into Private Property.

Jaime and the Posse are about to spring Probe out of La Dama's prison and decide to leave Paco behind, Jaime believes his friend is safer there as he himself is just adjusting to his scarab body. Before they leave Paco asks to Damper to come back with his friend. Damper tells him he shouldn't worry, Jaime is the Blue Beetle after all. As he sees his friends Paco knows the last Beetle was shot in the head. Alone.

Inside the Posse are in for a surprise. They expected a prison, but found some heavily guarded resort. Even worse the equipment can see Damper's cloaking field and the group is discovered and surrounded. The Headmaster of Warehouse 13 wishing to surrender is in for a shock as one of his guards Spinner switches the power of two Posse. Thumper explodes. Believing him to be killed Jaime and the rest of the Posse start to attack the guards. Headmaster orders his troop not to fire, Jaime powers up his scarab armor and battles the Headmaster.

Outside Paco is discovered by the outside guards, but gets unexpected help from the Peacemaker.

Thumper who after discovering he is still alive notices his power have been swamped are returning. While the Blue Beetle has trouble with besting the Headmaster as he refreshes his power by borrowing some energy from the guards around him. Best to separate him from his power source then, Jaime grabs his opponent and flies out of the compound. The compound was covered in a occult shield that prevented magical people to find it the Headmaster explains and request he should be returned as soon as possible but is too late as the Phantom Stranger already found him.

Back into the compound Jaime discovers La Dama, who his recognizes as Tia Amparo Brenda's aunt. The Posse manage to convince half of the inhabitant of Warehouse 13 to return to the outside, as there is a local superhero now to protect them by the Blue Beetle. The other half including Probe herself decide to stay preferring their current life instead to be looked at because their is different.

La Dama has no choice in letting them go. The Phantom Stranger allows her to keep hiding the once that wish to stay and eventually will become La Dama's personal army. Jaime and La Dama make a deal, he will not out La Dama and she will not out him. La Dama reminds him he better keep on her good side if he wants to learn more about his scarab. As she controls any magical facility in a thousand mile radius. Suddenly the Peacemaker followed by Paco drop in unannounced and the big man replies that Jaime should pass the magic offer. And reveals to the boy that the scarab is of extraterrestrial origin!

There are 22 pages of comic, ignoring the adverts and DC Nation. Panels are counted from the top down, left to right.