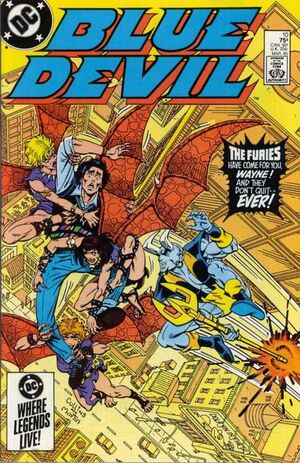 "Keep them occupied," she says! What's that--? Amazon humor?

Appearing in "Hell Hath No Furies"Edit

Synopsis for "Hell Hath No Furies"Edit

At some undisclosed point in the past, Wayne Tarrant had a career as a singing teenage-heartthrob named "Theseus" who dressed in ancient Greek-styled clothes and had at least one popular hit called "Pagan Love." While giving a concert, three young girls (Gina, Annie and one other unnamed girl) were highly smitten fans and managed to get backstage into Wayne's dressing room after the show. Wayne and the three girls spent the evening together. This entire incident is watched from Mount Olympus by the goddess Athena who is displeased at Wayne's use of her lover's name as well as his actions towards the young girls and vows to punish him if he ever resumes his impersonation.

In the present, Wayne, whose career is at a low point, attempts to recapture his glory days with a performance as Theseus in a night club. In attendance are Blue Devil, Sharon, Marla and Norm, several heckling shriners and the three ladies from the concert flashback. While Blue Devil intimidates the hecklers, Athena decides to release the spirits of the furies to punish Wayne and sends the urn containing said spirits onto the stage which Wayne breaks open during his dance routine. The spirits inhabit the bodies of the three wronged women who transform into winged furies intent on revenge. Blue Devil confronts them long enough for Marla, Sharon and Norm to drive Wayne to safety. Upon seeing that Wayne has fled, the furies dissipate.

The next day, Blue Devil leaves Marla Bloom's house, where he's been staying, to go to his workshop in Verner Brothers Studio to work on pyrotechnics for a movie. Outside he is greeted by the three members of I.H.N.C.S. but Blue Devil ditches them thinking they want to study him. They follow him to the studio and Blue Devil has security guard Fred Klein prevent their entry which leads to an altercation interrupted by Jock Verner. After meeting with the members, Jock orders Blue Devil to work with them as part of improving his public relations. The conversation, however, is interrupted by a phone call from Wayne Tarrant who tells Blue Devil that the furies have found him. Blue Devil goes to the rescue with the I.H.N.C.S. support who follow in a taxi.

The furies destroy Wayne's house and have him trapped in a tornado. Blue Devil rescues him and the furies pursue them and are observed by the traveling news van of KSTV-TV and reporter Megan O'Dell. Megan reports on the battle and the news coverage is watched by Etta Candy and Diana Prince. Recognizing the furies as the real ones from Olympus, Diana switches to Wonder Woman, flies her jet to Hollywood and joins the battle.

After Blue Devil tells Wonder Woman everything that happened, she tells Blue Devil to keep them busy. She then flies back to the nightclub to collect the shards of the broken urn. She reassembled the urn and returns to the fight instructing Blue Devil to use his trident's rocket thrust in reverse which sucks the spirits out of the three ladies. Then Wonder Woman tells him to release the energy into the urn which traps them.

Athena appears and asks why she would interfere in her punishment of Wayne's wrongdoing of the ladies but they admit they were willing participants. Seeing that the ladies forgive Wayne, Athena decides to as well and departs. Wayne apologies to the ladies then immediately hits on them and they storm off.

Retrieved from "https://heykidscomics.fandom.com/wiki/Blue_Devil_Vol_1_10?oldid=1413778"
Community content is available under CC-BY-SA unless otherwise noted.