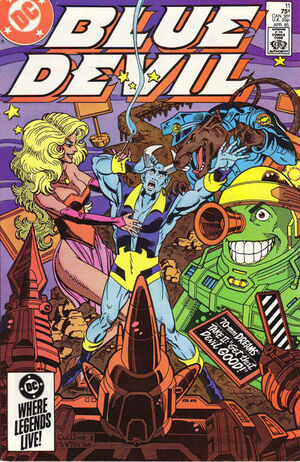 You're merely wasting the studios money! All the more reason to get out the red ink!

Norm Paxton is filming, and Blue Devil is performing rapid fire stunts in, a promotional film for the Blue Devil movie during which Blue Devil feels woozy and crashes into some camera equipment. At the same time Marla Bloom is watching and speaking to Jock Verner on the phone. He is complaining about expense reports and the film being way over budget ($2 million). He sends H. P. Wally over to inspect the books and look for accounting problems. Marla summons Blue Devil into her office to discuss finances where she reveals her entire life savings is invested in this film. Blue Devil appears as if he's caught a cold and Marla orders him to rest while they set up the special effects. On his way to his trailer he is cheered on by Eddie and then chastised by Wayne who also has his career at risk if the movie fails. Wayne has heard the rumor that H. P. Wally may be shutting the film down. Inside the trailer, Blue Devil is greeted by Sharon who was taking publicity photos earlier and is now making him chili. He asks Sharon out to dinner but she politely refuses saying that Marla's upset over the tabloid stories of their relationship. Marla and Sharon feel the relationship should remain low-key until after the movie comes out.

Later, Blue Devil performs the stunts again but nearly blacks out at the end just as H. P. Wally arrives and begins threatening to shut everything down. Blue Devil blacks out for several minutes... and ultimately awakens with Marla and a genuinely-concerned Wally helping Blue Devil towards an awaiting ambulance. However...

While Blue Devil was unconscious, he dreams a long, surreal dream where H. P. Wally is a powerful, and repeatedly morphing supervillain called "The Auditor" seeking Blue Devil's death. The dream sequence pulls many scenes (and dialogue) from famous movies/literature (See Notes).

Retrieved from "https://heykidscomics.fandom.com/wiki/Blue_Devil_Vol_1_11?oldid=1413779"
Community content is available under CC-BY-SA unless otherwise noted.