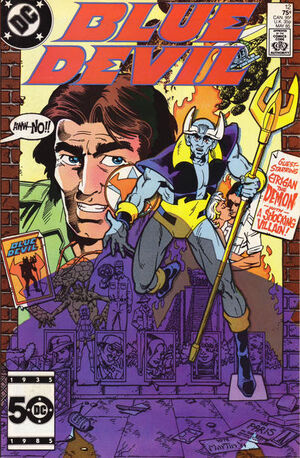 What the devil is going on here?

Appearing in "He's No Super-Hero"Edit

Synopsis for "He's No Super-Hero"Edit

In Metropolis, henchmen Smitty and Rojek sneak into Metallo's old headquarters with the intention of looting and selling his equipment but they encounter Shockwave still present who, after reading Metallo's People Weekly magazine and learning that Blue Devil will be at a Hollywood premiere this evening, recruits Smitty and Rojek to help him get his revenge.

In Verner Brother's Studio, Blue Devil, Sharon and Eddie are in Blue Devil's workshop. Blue Devil is inspecting his trident which has been acting weird but, unbeknownst to him, the trident is thwarting his efforts.

Elsewhere on the lot Marla and Jock are discussing the People Weekly magazine article. Jock reveals the article was supposed to be about how Blue Devil is a personal menace to Verner Brothers Studio but the magazine turned it around on him. The two argue while director Lou Hansen tries to film a hospital scene.

That night, Blue Devil and Sharon, Norm and Olivia, Wayne and his date, Marla and Eddie Bloom, and Jock and his chauffer/bodyguard Van Vanucci appear on the red carpet at the theater having the Blue Devil movie premiere. Blue Devil and Van have words but Marla manages to get everyone inside.

As the movie runs, Shockwave and his henchmen burst through the screen threatening Blue Devil who leaps into the fray. Norm and Marla manage to evacuate the building. During the fight Blue Devil wishes he had his trident and it mystically responds to his summons.

At that same moment, Jason Blood sense the mystical presence of a "hell-born entity." He apparently felt it earlier (likely when Blue Devil was inspecting the trident) and believed it to be in New Orleans. He changes to Etrigan to track down the presence.

Blue Devil and Shockwave continue to tussel, during which Jock's limo is destroyed, and the trident flies to Blue Devil. The trident brings Blue Devil's costume and somehow dresses him. Blue Devil suddenly feels more powerful and the fight resumes.

Smitty and Rojek finally manage to get out from the rubble of the theater but are spotted by both Eddie Bloom and Van Vanucci (who is hiding on the roof of a nearby building). Rojek fires a stun gun at Eddie but Eddie brought a device that shoots explosive bubbles at them which allows Van Vanucci to take them down.

Later in the fight, which is being televised and is seen by John Stewart, the energy in the trident coats Blue Devil who begins to speak differently. After taking Shockwave down, Blue Devil backhands Norm and announces that "he" is at last in control of the body and is prepared to "destroy the world of mortal men."

Retrieved from "https://heykidscomics.fandom.com/wiki/Blue_Devil_Vol_1_12?oldid=1413780"
Community content is available under CC-BY-SA unless otherwise noted.