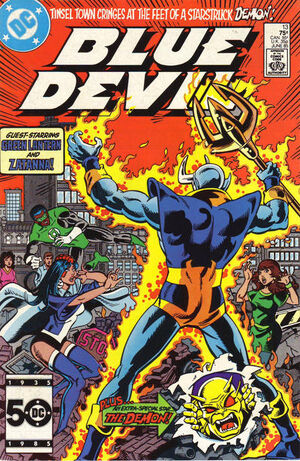 Appearing in "Hooray for Hollywood!"Edit

Synopsis for "Hooray for Hollywood!"Edit

A magical entity, apparently existing within the trident since it was left in Nebiros' home dimension, manages to take possession of Blue Devil. At first no one knows believing Blue Devil has gone insane and Van, Jock's chauffeur/bodyguard, asks Jock for permission to take him down but is refused. The police try to talk him down but Blue Devil attacks. Reporter Megan O'Dell arrives and interviews Wayne about Blue Devil but Marla interrupts certain that Blue Devil is not in control. Former henchmen Smitty and Rojek try to escape in the hovercraft but Blue Devil shoots them down.

At Goldie's Grub Diner, outside of Las Vegas, Nevada Etrigan stops for some food before hopping on top of a bus headed for Los Angeles, California.

After wolfing down a bucket of popcorn, Blue Devil is confronted by Green Lantern. Blue Devil sets a nearby building on fire but Green Lantern taps into a local water main and puts it out. During this, Norm notices that Blue Devil appears a little scared. Green Lantern returns to the battle but Blue Devil launches his trident which circles Green Lantern so quickly it mystical speeds up the time within, causing Green Lantern's ring's 24-hour charge to expire.

Meanwhile GBS network report Tawny Young arrives to take over coverage of the story from GBS local reporter Megan O'Dell who refuses. Green Lantern rescues them from an attack by Blue Devil. Norm gets an idea and finds Blue Devil's discarded tuxedo. Inside, as he hoped, he finds Blue Devil's personal phone book and calls the phone number for the Justice League Satellite (given to him by Zatanna earlier). He manages to reach Zatanna but is cut off by Blue Devil, however, Zatanna is able to sense the evil magic.

Blue Devil grabs Sharon who fruitlessly fights back until she mentions Nebiros which allows Blue Devil a moment to regain enough control over himself to start to fight the entity. Zatanna arrives and confronts the magical entity. Blue Devil gets an idea and hurls the trident into the air so it will return and impale himself. Instead the trident passes through him and pulls the entity out as it goes.

The entity manifests itself as a fiery head and Zatanna recalls its aversion to water. Norm verifies that he saw fear in the possessed Blue Devil when Green Lantern was spraying water. Blue Devil notices that the trident is within the entity and he jumps inside and activates the trident's rocket forcing he and the entity back inside the theater where he is able to spray it with soda from the concession stand. Driven off, the entity looks for another host and chooses Jock Verner. However, after a few moments Jock's body proves too frail to support the magical entity and it dissipates. Zatanna predicts Blue Devil's trident has now returned to its previous, technology-based functions.

The threat over, Sharon and Zatanna vie for Blue Devil's attention when Etrigan finally reaches the scene and promptly attacks Blue Devil. After a brief altercation, Blue Devil is able to convince Etrigan that the evil entity is gone and Etrigan leaves.

Retrieved from "https://heykidscomics.fandom.com/wiki/Blue_Devil_Vol_1_13?oldid=1413781"
Community content is available under CC-BY-SA unless otherwise noted.