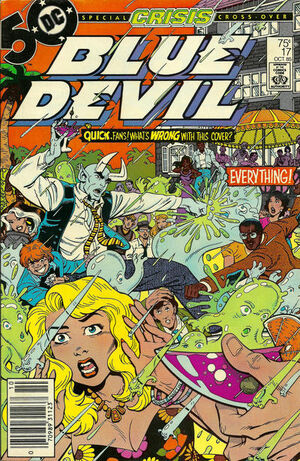 Appearing in "Fish Out of Water"Edit

Synopsis for "Fish Out of Water"Edit

A party is crashed by the Fisherman, who tries to make off with the guests' valuables. Blue Devil captures him while, at the same time, battling a horde of monstrous organisms that rain down as a side-effect of the cloud-seeding. No sooner does the hero restore order than he is taken by Green Lantern (John Stewart) to the Justice League satellite to help repair the Red Tornado.

Retrieved from "https://heykidscomics.fandom.com/wiki/Blue_Devil_Vol_1_17?oldid=1413785"
Community content is available under CC-BY-SA unless otherwise noted.