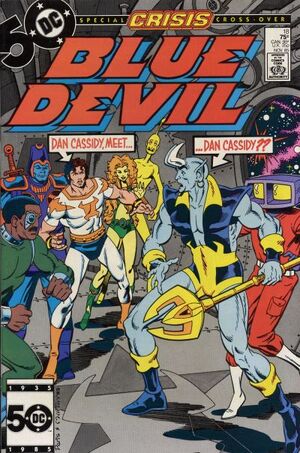 Blue Devil, along with four of the Omega Men, is sucked into a parallel dimension where all technological development revolves around the movie industry. After helping a group of people from that world save their Dan Cassidy (Blue Devil's dimensional counterpart), the Omega Men are returned to the Earth-One continuum, as is Blue Devil.

Retrieved from "https://heykidscomics.fandom.com/wiki/Blue_Devil_Vol_1_18?oldid=1413786"
Community content is available under CC-BY-SA unless otherwise noted.