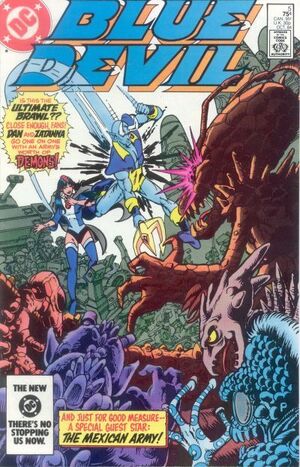 In the village of Santa Guadalupe, Nebiros goes on a rampage that there are no longer temples dedicated to him. Using Blue Devil's trident, now imbued with magical energy, causes two long dormant volcanoes to erupt.

Zatanna and Blue Devil, who teleported to Durango, spot the volcanoes. Blue Devil tries, at Zatanna's urgings, to mentally summon the trident but Nebiros senses the attempt and sends some mystical energy to discourage him. They contact the Mexican authorities and are soon aided by General Ruiz of the military. They head in Nebiros' direction.

Nebiros, meanwhile, senses that his temple is not destroyed, just long buried and brings it to the surface. The military begins arriving and Norm Paxton, camera in hand, parachutes to the area with orders from Marla Bloom to film everything.

In Mexico the military attacks Nebiros and his temple and, in response, Nebiros summons a horde of demons to his aid. Zatanna and Blue Devil launch their own attack, with Norm following close behind. While Zatanna keeps the demons occupied, Blue Devil attacks Nebiros head on. Blue Devil goads Nebiros into throwing the trident at him. Once the trident is free from Nebiros' direct control, Blue Devil tries again to summon it. After a concentration battle, the trident goes to Blue Devil who becomes temporarily affected by the power. Blue Devil uses the magical energy to banish the demons and destroy the temple. Zatanna creates a vortex to suck all the "unearthly elements" back to Nebiros' home dimension but it's not strong enough to pull Nebiros in. Blue Devil pushes him into the vortex with a blast from his trident and Nebiros is once again locked away. Zatanna tells Blue Devil that the trident still has magical energy, then she kisses him and tells him to call her before flying off leaving Blue Devil and Norm left to accept the gratitude of the Mexican people.

Retrieved from "https://heykidscomics.fandom.com/wiki/Blue_Devil_Vol_1_5?oldid=1413773"
Community content is available under CC-BY-SA unless otherwise noted.