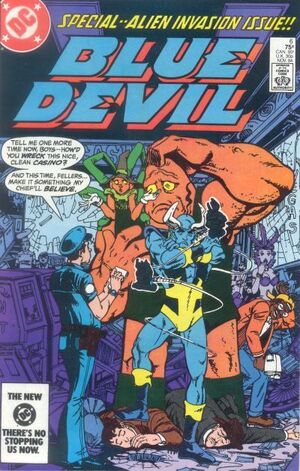 Appearing in "Night on the Town"Edit

Synopsis for "Night on the Town"Edit

On the planet Maldor, two aliens Jorj and Lehni, try to escape from a blue, devil-shaped robot cop. Unable to reach their ship, they take refuge in a building wher an experimental device, the Microbeam Projector, is being demonstrated to a group of onlookers. The device is designed to "reduce objects to energy imprints" and beam them safely to receiver units anywhere in the galaxy. Six of the blue robot cops break into the building and Jorj and Lehni try to escape bumping into the control column causing the lead scientist to accidently activate the launch sequence. The device converts the two aliens into energy sending it into space. The six cops also enter the beam and are also sent into space.

Blue Devil and Norm Paxton are flying/hopping their way back home from Mexico when they land at Goldie's Grub diner just outside of Las Vegas, Nevada. They go inside where Blue Devil orders a hot apple pie and Norm calls Marla Bloom to give her an update. Outside the diner are former Metallo henchmen Smitty and Rojeck, who, along with new colleague Bert, are about to leave for Las Vegas.

Marla, Eddie, Sharon and Wayne are attending a party being thrown by Jock Verner to celebrate the upcoming Blue Devil movie. Jock makes threats against the missing Blue Devil as well as Wayne Tarrant. Eddie tells the group that Norm has called and that he needs them and the gang leave the party to Jock's displeasure.

Back at the diner, Norm tells Blue Devil his theory that Blue Devil's combination of technology and magic has converted him into a "weirdness magnet." Just then the diner's microwave oven begins smoking and vibrating only for Jorj and Lehni to emerge. Spotting Blue Devil and believing him to be a robot cop, they flee the diner. Shortly thereafter the six blue robot cops emerge from the microwave oven and pursue them. Blue Devil and Norm follow.

Jorj and Lehni run along the road and are soon surrounded by the robot cops. The cops are hit by a van driven by Bert, Rojek and Smitty, which stuns the cops long enough for Jorj and Lehni to take them down. Rojek invites the aliens to join them offering them a job. They agree and squeeze into the van which leaves. Blue Devil and Norm land among the robot bodies and Dan begins filming. Two of the robots are still working and Blue Devil takes them both down. Blue Devil and Norm continue on to Las Vegas in pursuit of the first two aliens. As soon as they leave, however, the robot cops are able to repair themselves and pursue the others.

Blue Devil and Norm enter one of the casinos where they are accosted by guards and told to leave, but Blue Devil tosses them aside. They call the cops. Outside Rojek, Smitty, Jorj and Lehni exit the van when they hear approaching sirens. Bert, still in the van, panics and drives off and the police pursue assuming he is the reason they were called. The robot cops arrive and Jorj picks up the others and flees into the casino.

The four encounter Blue Devil inside and Jorj attacks him thinking he's a cop. Blue Devil knocks him down where he crashes into (and breaks) several slot machines. Smitty and Rojek start collecting the coins as the six robot cops enter. Blue Devil asks Jorj why they're being chased and Jorj tells them that Lehni made a pass at the Colonial Governor's girlfriend and then broke all three of the Governor's legs. Blue Devil, Jorj and Lehni then fight the robot cops together - one lands on Rojek and Smitty causing them to lose their coins.

Back on Maldor the scientists are able to find the transported aliens and find a nearby receiver but the robot cops are not receiving their messages.

In the Hotel Martin in Los Angeles, James Jesse hurrily packs suspecting that someone is on to his whereabouts. Bolt arrives and attempts to kill him but James escapes.

Back at the casino Rojek and Smitty try to escape with bags of money. The robots have reformed into one large robot and attack the three again sending Blue Devil into the two henchmen yet again. Blue Devil and Jorj take down the robot which reforms into several miniature robots.

On Maldor the scientist realize that the robots are closer than ever to the microwave unit and activate the retreival system.

On Earth the little robots fight with Blue Devil, Jorj and Lehni in the casino kitchen. When one robot accidently enters the microwave oven it disappears. Blue Devil tells the others to grab the cops and shove them into the oven and they succeed in getting rid of them all. Blue Devil tries to force the aliens into the microwave but they are too large to fit.

Earth police arrive but Norm manages to convince them that Blue Devil and the two aliens just thwarted an alien invasion and should be treated as heroes. When the manager arrives to complain about the damages, he mentions that Jock Verner owns the casino and Blue Devil tells them that Jorj and Lehni will work off the damages as casino bouncers. Rojek and Smitty turn themselves in desperate to get away from Blue Devil and the others.

Retrieved from "https://heykidscomics.fandom.com/wiki/Blue_Devil_Vol_1_6?oldid=1413774"
Community content is available under CC-BY-SA unless otherwise noted.