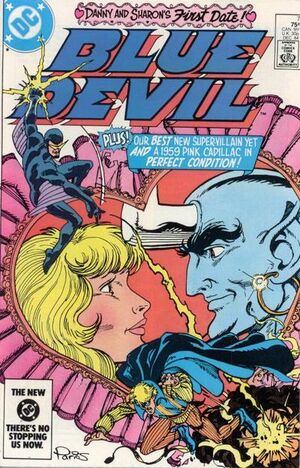 Appearing in "Just Another Day in L.A."Edit

Synopsis for "Just Another Day in L.A."Edit

Colfax and his unnamed partner report in verifying that James Jesse is inside the Drake Hotel unaware that they are observed by him. Two additional men show up and the four prepare to take him down. James Jesse (now dressed as Trickster) steps out the window and hits them with water balloons. Colfax reports in calling for the skyriders - three men on flying platforms. Trickster throws a special horseshoe magnet at them causing their platforms to cling together and spiral out of control. Bolt appears and attacks winging Trickster who falls into a dumpster. Bolt searches the dumpster but is unable to find Trickster and flies off. Trickster, however, is hiding in a neighboring dumpster having misdirected Bolt with some illusion-casting device. He realizes he needs help.

Wayne Tarrant and Marla Bloom take Blue Devil to get a suit which turns out to be a difficult task. Blue Devil, in a foul mood, assaults Wayne over a jealous remark and vows to try on one last suit before they leave. Wayne flirts with an employee named Gina whom he apparently encountered before but doesn't recall. Blue Devil forcefully removes Wayne from the store. Gina then places a mysterious call.

Later that day at Marla Bloom's house, three members of an organization I.H.N.C.S., are greeted by Gopher Bloomberg. Gopher informs them of Marla's and Blue Devil's whereabouts and the three hand Gopher a business card and leave.

Blue Devil is driving Marla's Porsche but is too large to operate it easily and nearly drives off a cliff but damages the floor, brakes, windows, steering wheel and roof in the process. He returns to find Marla surprisingly unconcerned over the Porsche. Sharon Scott arrives and the two leave on a date. Trickster, meanwhile, has found them and follows. Bolt also arrives but Trickster drives him off with a cream pie in the face.

Blue Devil and Sharon arrive at Chez Alphonse where Blue Devil tells Sharon that his life may always be as bizzare as it has been and Sharon asks him not to isolate her because of that. They are unawre that they are being observed by the three people who talked to Gopher earlier. Trickster, meanwhile, his tied up the kitchen staff and partially dresses as an employee. He approaches Blue Devil and asks for his help hoping their mutual careers as stunt men will form a bond. Bolt appears and attacks and Blue Devil attacks back calling for Trickster to team up. Trickster, however, leaves diving through the front window (and the three observers). Bolt only fights Blue Devil long enough to escape stating he doesn't do hits for free. He runs out the door but Trickster has placed a trip wire then throws an air conditioning unit at him. Blue Devil and Trickster fight Bolt together during which Bolt learns and recognizes Blue Devil's real name. Bolt is forced to flee when his suit needs recharging and Blue Devil demands answers from the Trickster.

Retrieved from "https://heykidscomics.fandom.com/wiki/Blue_Devil_Vol_1_7?oldid=1413775"
Community content is available under CC-BY-SA unless otherwise noted.