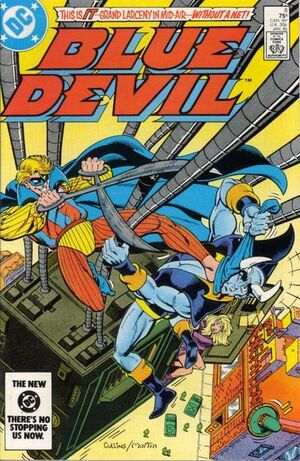 The next day Blue Devil, Trickster and Sharon Scott are driving along the California coastal highway. They come across a mobile bank about to be flown to a new location. Trickster expresses his interst in robbing a bank in mid-air but Blue Devil instead takes him, and Sharon, to eat at a Mexican fast food restaurant. While inside, three kids attempt to steal the trident from the car only to get zapped by magical energy and flee. Inside the Trickster finds a message inside his Pinataburger stating they know where he is,and where he's going. They also want him to return what he's stolen. Panicked, Trickster pretends the burger was too spicy and runs towards the men's room to get water. Blue Devil gets suspicious and goes looking for him and finds a hole in the wall.

Trickster runs through the air realizing his only chance is to get as far from "the organization" as possible. And to do that he needs a lot of money which means he needs to rob that mobile bank. He finds a hangglider and asks the man where the nearest paint store is.

In Hollywood, Verner Brothes Studios, Wayne Tarrant is attempting, with only partial success, to film a toilet paper commercial. Annie and Gina speak of how Wayne didn't recognize either of them. Elsewhere on the lot, Eddie Bloom sneaks into Dan Cassidy's workshop.

Trickster catches up to the helicopter transporting the mobile bank and throws black paint on the helicopter windishield and the pilot forcing him to land. Blue Devil spots Trickster and tells Sharon to keep eveyone distracted while he takes the Trickster down. He grabs his trident and flies towards the Trickster grabbing him and dragging him into the ocean where Trickster traps him in handcuffs.

The bank lands and Sharon enters to keep them distracted. She pretends to be grateful to find a bank so she can make a deposit to save her house.

Trickster and Blue Devil continue their fighting but Trickster escapes. The helicopter pilot spots him coming and takes off trapping Sharon in the bank with the manager and security guard.

In Santa Veronica College Professor Neemish is yelled at by the chairman over the death of Neemish's graduate student who was found in possession of documents from the school's Defense Research Group. The Pentagon is sending people to investigate and the chairman expects Neemish to provide answers when they get there. Neemish returns to his office and calls Bolt on a secret communication device. Bolt reveals that he had killed the college boy and Neemish authorizes him to kill the chairman and make it look like an accident.

Trickster attempts to sever the cables between the helicopter and the bank but stops when he hears Sharon calling out from inside the building. Blue Devil finally catches him. When the bank returns to the ground, Blue Devil points out that there was no money in the bank anyway; it was being transferred by armored cars. The security guard calls for the police but Blue Devil suspects they'll not be able to hold him and states he'll take him to jail personally. He throws Trickster into the trunk. The manager becomes suspicious, however, when they realize that Sharon is with them. The three drive off.

Retrieved from "https://heykidscomics.fandom.com/wiki/Blue_Devil_Vol_1_8?oldid=1413776"
Community content is available under CC-BY-SA unless otherwise noted.