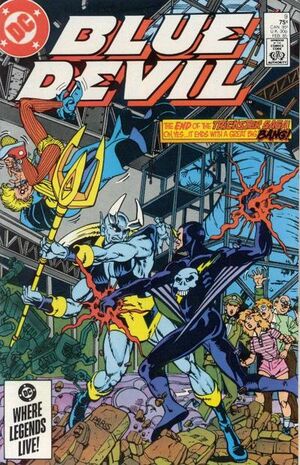 While Doctors Neemish, Beeker and a third unnamed doctor lament not having a certain prototype to consult, Bolt tracks down Trickster, Blue Devil and Sharon Scott and attacks them from the air. Trickster launches a stream of bubbles at him but Bolt zaps them and forces the heroes' car off a cliff. Just then Blue Devil's trident takes off aiming straight for Bolt who flees. Trickster carries Blue Devil and Sharon into the air but finds he is missing one of his air walker shoes. Trickster has difficulty keeping them aloft (See Notes) so Blue Devil swings and leaps towards a nearby ledge giving Trickster the chance to land safely with Sharon. The trident returns to Blue Devil.

Bolt teleports to the three scientists and presents them with Trickster's missing shoe which he found amongst the refuge of the wrecked car. He also reveals he knows Dan Cassidy by reputation. The scientists send Bolt and the shoe to the testing site and, after he leaves, they discuss whether Bolt might be a bigger threat to them than the heroes. They vow that Bolt must never learn the truth.

At a motel, Blue Devil and Trickster talk while Sharon enjoys the motel pool. What seems like an earthquake occurs, with Blue Devil rescuing Sharon from the diving board. Trickster says "They must be testing the device." After the rescue, Blue Devil demands answers and Trickster tells him that he was working for a super-secret criminal organization, so new it doesn't yet have a name, that plans to secede California from the USA by separating it from the mainland. To do this, they plan to levitate the state using the technology in Trickster's air walker shoes. Trickster was paid to help them but left with the money without giving them his shoes.

At Verner Brothers Studio, Eddie Bloom hands Wayne Tarrant a rhyming, threatening note he was told to deliver from Gina and Annie. Eddie also has a journal meant for Blue Devil left by some college professors on how to act like a super-hero. Eddie then says he'll be cleaning Blue Devil's workshop.

At the Santa Veronica College workshop the scientists explain their plan to Bolt. Studies have apparently shown that the rest of the country has socioeconomically been holding California down and that, left to its own accord, California could outcompete all other nations. To that end they've built a fifty-foot shoe with antigravity powers to levitate the state to independence.

Trickster and Blue Devil, meanwhile, have created a device to trace the unique energies of the air walker shoes and are able to home in on the stolen shoe. They barge into the lab but the scientists activate an anti-gravity field causing the two heroes, and all the small objects around them, to hover in mid-air. Blue Devil hurls Trickster far enough away that he escapes the field and collides with Bolt. Trickster steals back his second shoe and disables the device holding Blue Devil. Bolt takes a swipe at Trickster but Blue Devil zaps him with his trident. Bolt realizes that the three scientists aren't part of a larger organization - they are the entire organization. Bolt threatens them into talking.

The scientists tell them that their plan is to test their theories of history and socioeconomics. The henchmen and skyriders were all hired via The Monitor. Blue Devil has heard enough and he and Bolt go at it. Unable to achieve their ultimate goal, the scientists decide to settle for levitating the Santa Veronica peninsula. They climb into the flying shoe and levitate the city but the city drifts back down to Earth. Trickster explains that one of his shoes controls ascent and the other descent and that the scientists only stole the ascent one. The giant shoe, therefore, will not allow them to land. After reuniting with Sharon, who stayed in the car which is now also levitating, Blue Devil tells the scientists to try descending and they realize they cannot. They beg for Blue Devil to get them down safely. Using the trident to maneuver, Blue Devil guides the car to the shoe and the scientists climb into the car leaving the shoe to levitate its way into outer space. The car leaves the antigravity field and plummets towards the ocean but Blue Devil uses the trident to level them out so they at least crash safely. Trickster pulls out a rubber duck that inflates into a life raft.

Retrieved from "https://heykidscomics.fandom.com/wiki/Blue_Devil_Vol_1_9?oldid=1413777"
Community content is available under CC-BY-SA unless otherwise noted.