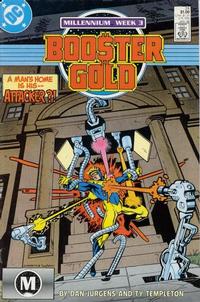 Booster Gold returns home from a JLI press conference, congratulating himself on having uncovered the Manhunter assigned to his teammate, Captain Atom. His confidence is shaken, though, when he is attacked by the automated security devices of his own mansion. Gaining entrance to his home via a trapdoor tunnel, Booster contends with further traps activated against him by a mysterious figure at a control console. Within the mansion, Trixie Collins is shocked as a computer display informs her that Booster Gold Interna-tional is bankrupt. Dirk Davis appears and reassures her that this cannot be true, just as the mansion suffers a power blackout. Meanwhile, Booster correctly deduces that one of his staff must secretly be a Manhunter. Escaping the traps, he enters the mansion proper, and quickly confers with Trixie and Skeets. When the three confront Mackenzie Garrison, they are stunned to discover that not she, but Dirk Davis, who now appears in his Manhunter uniform, is the sleeper agent in their midst. As Booster and the Davis Manhunter battle, Booster realizes that he has nothing to gain and everything to lose by fighting the Manhunters. He calls a halt to their fight and tells Davis that he will join the Manhunter cause.Later, a press conference is called, at which Booster denounces the Oans and the Justice League, and announces his support of the Manhunters.

Retrieved from "https://heykidscomics.fandom.com/wiki/Booster_Gold_Vol_1_24?oldid=1510065"
Community content is available under CC-BY-SA unless otherwise noted.