View source
Part of the 'Faces of Evil' event 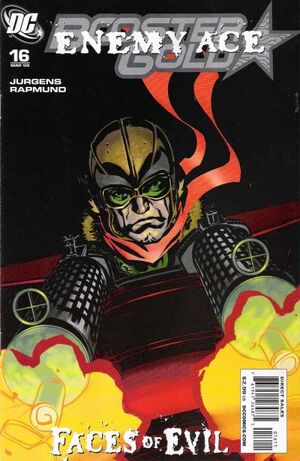 When this conflict began, the Kaiser could not have envisioned a landscape so barren and devoid of life. A sea of mud that swallows the blood spilled across it. Am I simply a tool of war adding to the carnage? Am I here to kill-- --or protect those at home?

Last Issue: Booster Gold was thrown into a time portal created by the Time Knife and finds himself on the battlefront of World War I Germany. Not used to the carnage of war, Booster shoots the engine of the Fokker Dr.I piloted by Rittmeister Hans von Hammer after it shoots down Allied planes. As Booster dodges the plane, he discovers the plane was followed by a time portal that, to his dismay, damaged his power suite. As the pilot lands, he shoots the American soldier in the arm, but allows Booster to tend to his wound. The American soldier and he are then captured by the German and brought to a castle to be interrogated. Hammer, who discovered both man have no interest in war and unwilling to let two innocent men die, gives Booster the means for their escape - the Time Knife. (Booster begins to suspect the knife had drawn him here)

With it, Booster forces the prison lock and flies away with the American soldier to the nearest Alliance hospital.

Meanwhile somewhere in the Pre-Crisis era, Goldstar and Skeets scramble Elongated Man's memory after they get the Time Knife from him and try to locate Booster, not realising the chronal energy based Rex Hunter is hitch-hiking on the Time Sphere.

At the hospital, Booster learns the full name of his fellow escapee Cyrus Lord, and quickly realizes that he preserved the existence of Maxwell Lord, the man that killed his best friend, Blue Beetle. As Booster leaves the room, something begins to glow in his pocket. It's the Time Knife and it pulls him to another time.

At that time, the Time Sphere almost closes in on his location. His disappearance wasn't caused by them as Skeets thought, but by the time-traveller Rex Hunter, who demands the knife from them.