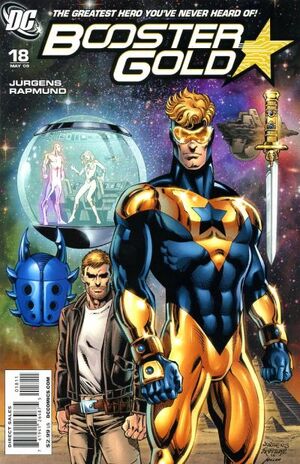 Oh, c'mon. Would the devil be as good looking as me?

After Booster Gold stopped his father and Rex Hunter from erasing Barry Allen from the time line, Booster now finds himself face to face with himself from the future. At first Booster isn't sure about his future him claim but scans from his badly damaged droid Skeets proof its claim and Booster's eyes match logged retinal patterns. The future Booster borrows Skeets for a trip in Rex Hunter's Time Sphere to ancient Egypt following the chronal energy from the time knife, while the past Booster will track the chronal energy composed time thief using the time sphere of Rip Hunter. The future Booster promises he will drop off his older self at the exact same location so he history could take his course again.

Future Booster arrives in Egypt 2500 BCE and witness a ritual that could revive the Pharaoh Kha-Ef-Reh using the Blue Beetle Scarab to fill the Time Knife with chronal energy. Draining the scarab of its power. If completed, the scarab would have died and none of the Blue Beetles would have ever existed. The revival of the pharaoh would have been too high a price to pay, so Booster Gold interferes.

Meanwhile Goldstar and future Skeets find themselves at the end of time the Vanishing Point and their captor, the chronal energy thief uses his 3 stolen time knifes to get access to a time portal while raving on about Rip Hunters hypocrisy about time travelling. Past Booster Gold arrives to stop him but seeing his twin sister who he thought had died distracted him long enough to get blasted. The villain takes advantage of this opportunity to show Michelle using the time portal how she was supposed to die years ago and that Rip Hunter broke his own rule to save her, while Rip did nothing to save him after he was killed and took on his new chronic energy form. He reveals himself to be Rex Hunter the rejected Time Master. He shows them the wereabouts of the future Booster Gold as he attempts to rescue the scarab and Rex Hunter concludes that the chaotic reign of the Black Beetle is far worse then the good the Blue Beetles would do and and uses his own energy to further drain the scarab. Both Boosters confront Rex and the villain is defeated when the future Booster Gold stabs Rex with the time knife, overloading his body. As Rex body disappears, past Skeets urges the two to place the time knife, scarab and Kha-Ef-Reh's corpse where they belong.

At Vanishing Point Michelle falls into despair not knowing how to handle her just discovered second life.

Retrieved from "https://heykidscomics.fandom.com/wiki/Booster_Gold_Vol_2_18?oldid=1413843"
Community content is available under CC-BY-SA unless otherwise noted.