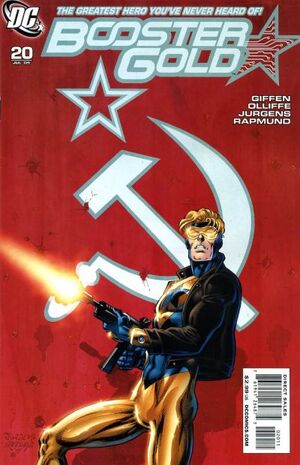 Huh, my sister did a science project like this in the fourth grade. If I remember correctly, I screwed that up too. Let's try it without the embarrassing explosion this time.

After getting in the way of a repair job on Rip Hunters Time Sphere. Booster Gold travels to the 1952 for some sightseeing in Las Vegas. All the while Rip grumbles he thought they where done with that number.

But Hunter's imprecise science drops Booster of near a launch site somewhere around Mosely, Nevada. While he follows the road to the city he is discovered by a soldier working under Frank Rock and he and his team try to blackmail this illegal super-hero to join the cause of Task Force X. In this time wearing a mask is illegal and everyone sporting hero gear could be arrested.

The mission is to expose Doctor Doctor Sergei Pushkin a Russian scientist working with the USA on the space race. As a traitor to the American cause. Unexpectedly thanks to the good doctor the launch is way ahead of its time and there conducting a flight to outer space this night. Booster stops it giving a diversion to Task force X to apprehend Pushkin but not exposing him.

When home Rip explains to Booster that Pushkin was the grandfather of Sergei Pushkin a member of the Rocket Red Brigade. And one of the founders of this same group. The doctor got more careful and the space program started to lag behind until he was exposed by Franklin Rock as a traitor in 1954. But he is a valuable source to waste so the USA placed him under house arrest, where he worked on the Rocket Red armor in secret until he was sprung in 1957 by the Soviets. But he didn't live to see his work completed and it was up to his son. So the legacy of the Rocket Reds are secure at least until 1962.

But thanks to all this Booster didn't get the change to do in 1952 what he wanted. Rip drops him of in a drive thru in 1952, where he tries to be cool. Seems like Booster has a lot to learn about the 50's.

Retrieved from "https://heykidscomics.fandom.com/wiki/Booster_Gold_Vol_2_20?oldid=1413845"
Community content is available under CC-BY-SA unless otherwise noted.