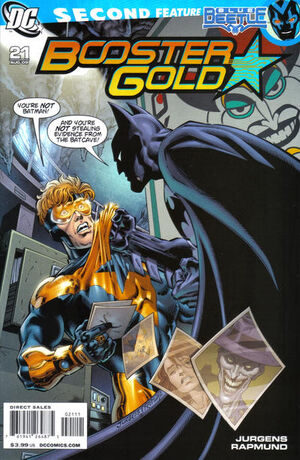 I like a world without a Batman. I'd prefer not to see Nightwing, or anyone else for that matter wear the cowl!

Appearing in "Day of Death: Part I of IV"Edit

Synopsis for "Day of Death: Part I of IV"Edit

As Rip Hunter scouts Vanishing Point he is discovers someone, or rather the man discovers him. In the nick of time, he escapes from the Black Beetle. The Black Beetle doesn't know who Rip Hunter really is, thereby making it impossible to erase him from Time. But the villain intends to find out; he has all the time as a member of the Time Stealers

Booster Gold saves some people in a burning building somewhere in Coast City, and in an attempt to score points at his light weight image, Booster intents to gain the full credit. But in the smoke he is mistaken for a Green Lantern. Skeets suggests to let it go and the duo returns to the Time Lab answering Rip Hunter's distress call.

Batman created a few loose ends in protecting the timestream, as Batman had the photos made by the Joker from Batman: The Killing Joke proof that Booster is a Time Master, and not the joke people believe he is. Rip suggests that Booster returns to the Batcave and take the photos back.

In the Batcave he encounters Batman, who is surprised that our hero recognises him as Nightwing. Booster has no choice and explains to the New Batman his intentions in how he tried to save Barbara Gordon from being shot by the Joker. But they are attacked by the Black Beetle before he can blur out the biggest secret. The Black Beetle is gunning for Nightwing but he can't get a clear shot on either Booster or Nightwing. The villain disappears claiming there are more ways to clip a bat wing.

After he leaves Booster noticed Batman is gone and that there are two Robin suites in the Batcave. The Black Beetle succeeded somewhere in the past, and Jason Todd seems not to be the first Robin to die.

Jaime Reyes and his friends are enjoying some time together at El Diablo (fast food cafeteria) when suddenly the city is rampaged by a giant robot going by the name Thinko. The Robot appears most durable, as it takes the Blue Beetle 3 hours to bring the contraption down. After doing some research, Brenda discovers that the villain Alan von Neumann, Jr. once used Thinko to attack El Paso. Ready to discover more, the trio visits Las Tunas Federal Correctional Facility only to discover that the man they visit is his son, the creator of the Unimate robot. He denies any involvement, believing it is the work of "a hobbyist with a robot fetish" and asks them to leave his daughter out of all this as she suffered enough bad publicity already.

Back in El Paso Jaime explains to Paco that his Scarab seems to be more bloodthirsty after it rebooted. But before Jaime can explain more they are surprised by a squad of Unimates

Retrieved from "https://heykidscomics.fandom.com/wiki/Booster_Gold_Vol_2_21?oldid=1413846"
Community content is available under CC-BY-SA unless otherwise noted.