Start a Wiki
Part of the 'Flash: Flashpoint' event 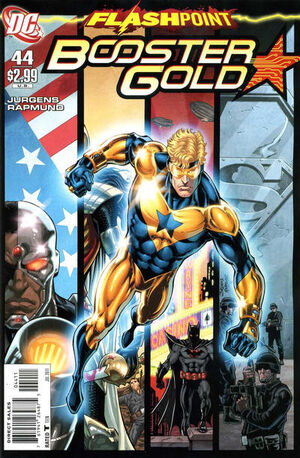 None of our guys can fly! Look at him! He could be Aquaman's brother for all we know!

Booster Gold flies to Coast City. The military spots him on their radar, mistake him for an Atlantean, and fire missiles at him. Due to an incosistency of Coast City's population (provided by Skeets, and the odd behavior of the U.S. Army, Booster decides that he must be in a different timeline or universe, and retreats. With a quickly deplenishing force-field, Booster is shot by a pulse beam and knocked-out. Recents event flash through his mind - how he went to the fridge in the Time Lab and saw a bright light. Then, the Time Lab was empty, completely empty, so he decided to go to Coast City to talk with Green Lantern, to see if he knew what had happened. Booster then regains consciousness and discovers from a newscast that in this reality, the United States is at war with Atlantis. Booster and Skeets decide to activate the homing device built into Booster's suit to return home. The function fails, and Skeets theorizes that they are not in an alternate timeline, but that this is the 'only' timeline before he goes offline. Booster then encounters the Army's newest weapon - Doomsday!

Retrieved from "https://heykidscomics.fandom.com/wiki/Booster_Gold_Vol_2_44?oldid=1512270"
Community content is available under CC-BY-SA unless otherwise noted.