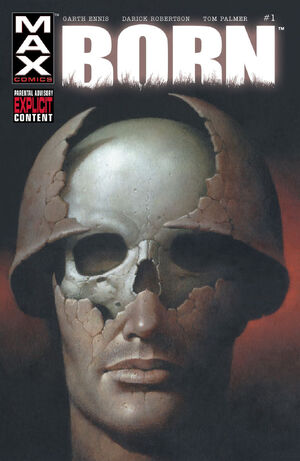 Tomorrow is another day... But not for some mothafucka.

Appearing in "The First Day"Edit


Synopsis for "The First Day"Edit

Private Stevie Goodwin is just 39 days and a wake-up away from leaving Firebase Valley Forge, Vietnam for home. He has convinced himself that he will return home alive to live a fulfilling American life and never return to Vietnam, that he will not become a "combat junkie" like his commanding officer, Captain Frank Castle. He does, however, admit that Castle is likely the reason he will survive this last stretch of time, as he is fully dedicated to his men and has not had one killed in the six months since his arrival. Castle's background is murky, rumors surrounding him say that he was put into Special Forces training during his first tour in Vietnam, with his second being a complete mystery--though there's talk of various wetwork and unspeakable "horror stories."

The Firebase Valley Forge platoon goes out, and at Castle's command takes hidden positions. A Viet Cong supply run passes their position unawares and the platoon fires on them, killing them all. Afterwards Goodwin thinks about his future and the sons he will eventually have and how he will never tell them about this time in his life.

Captain Castle makes a report to his uninterested superior, Colonel Ottman, including relaying his belief that the North Vietnamese Army is gearing up for an offensive and the base needs to prepare for it. Ignoring his fears, Ottman simply assigns Castle to give the incoming General Padden a tour for his surprise inspection, as he'll be "too sick" when he arrives.

Padden lays into Castle, calling the base a "disgrace" citing bunkers unmanned and in need of repair, filthy and rust covered artillery, blatant drug use, and a near total lack of respect for superior officers among soldiers. When he questions why no one has even attempted to rectify the situation, Castle informs him that the last officer who tried was "fragged," which Padden does not believe because that the fragging of officers is a myth. He demands a real answer, and Castle tells him that Firebase Valley Forge is undermanned, short of equipment, and the men know it and figure if the Generals don't care, why should they.

Padden informs Castle that he's going to recommend closing the base. Castle questions who that will leave watching the enemy in Cambodia, since they are the last base in the country, and Padden tells him that it doesn't matter since the war is over for all intents and purposes. Before Padden can get on his helicopter Castle wants to show him one more thing to prove the base is necessary. He takes him to a ridge and, while covering a sniper warning sign, tells him to walk to the end where the sniper shoots and kills him.

Later, while seated next to a bunker, a "voice" talks to Castle. It calls him clever for getting "his war" a stay of execution, but warns him that it's still coming to an end. It knows that he loves this, it makes him feel alive, and offers to fix it so he can do it forever if he just says the word--but there will be a price.

Retrieved from "https://heykidscomics.fandom.com/wiki/Born_Vol_1_1?oldid=1415091"
Community content is available under CC-BY-SA unless otherwise noted.