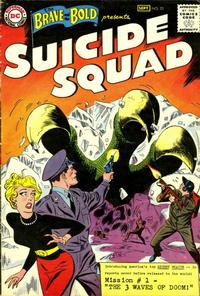 Our bullets have no more effect on it -- than paper bullets against a tank!

Appearing in "The Three Waves of Doom!"Edit

Synopsis for "The Three Waves of Doom!"Edit

A large wave carrying a reddish hued object begins to ebb it's way towards a seaside resort. As onlookers run, they feel a great heat coming from the wave, as it turns the sand into glass beneath it. Firefighters and bombers carrying foam bombs are unable to stop the heated object, and are forced to retreat as it causes their hoses and wings to melt! When all other options are exhausted, the military commander puts in a call to the new team, the Suicide Squad!

Colonel Rick Flag is the Suicide Squad's team leader, and pilot of the "flying laboratory", a plane with special equipment on board for analyzing and testing. Beside him sits Karin Grace, flight medic for the team who is secretly attracted to Rick. The lab section of the plane holds the astronomer Dr. Evans and physicist Jess Bright. As the plane flies over the strange heated anomaly it is brough into an uncontrolled dive! Rick quickly drops bombs below and lets the turbulence from the explosion toss the plane back into a higher altitude that he can straighten it out.

Jess and Evans have come up with a plan to stop the red wave, but for it to work, Rick will have to swoop down over it and hope it doesn't take them in it's heat storm. They put it to a vote, and it is unaminous, so Rick pilots the plane towards the red core. When they get close enough, Evans and Jess send a blast of air pressure out the tail of the plane, hitting the wave with absolute zero temperature, halting it completely as it freezes in ice.

The wave is stopped, but core object still intrigues Jess and Dr. Evans, the shadow of a figure can be made out within. Meanwhile at a secret launch site, Rick and Karin are inspecting a rocket that is to be sent to the moon to gather data for future space travel. Though it is manned by dummies today, Karin comments that the rocket will one day be ready to carry live human passengers back and forth to the moon and beyond. They make their return to pickup Evans and Jess, when suddenly, a giant reptilian hand smashes out of the core, and soon a great beast claws it's way out of the center! The Squad's guns have no effect on it's thick scaley hide, and it seems to freeze whatever it touches. Rick and the others escape into the flying lab. Evans believes it was the extreme heat that kept the creature dormant for so long, so he and Jess hypothesize that another dose of heat should stop it again. While they work out a plan in the back, Rick tries to lead the creature into the ocean, but the beast won't follow. He tries firing a special atom warhead at it, but it catchess the missile and freezes it before it can go off. Evans and Jess have come up with a formula that acts like salt on ice, hoping that using it on the creature will cause it to melt.

The creature is sprayed with the formula until it's entire body is covered, but the the Squads shock, the creature suddenly changes color. No longer cold to the touch, the beast now seems to draw in all the chlorophyl around it, turning all the trees and grass a ghostly white color. Rick has one last plan, but it could spell the end of them all. Another vote is cast, and then, with all members ready to risk their lives to save humanity, Rick leads the creature to the launch site. The four of them abandon the plane and rush into the rocket, taking their stations as Rick begins the countdown. As expected, the creature latches itself onto the rocket just as it takes off, carrying the beast and the Suicide Squad out of Earth's atmosphere. Rick takes the rocket closer and closer to the sun until the gravitational pull pulls the creature off the rocket and into an eternal orbit. With great effort, Rick brings the rocket out of range of the sun's orbit and begins the long 90 million mile journey back home...

Retrieved from "https://heykidscomics.fandom.com/wiki/Brave_and_the_Bold_Vol_1_25?oldid=1413899"
Community content is available under CC-BY-SA unless otherwise noted.