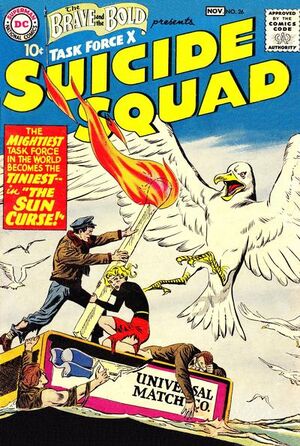 Appearing in "The Sun Curse!"Edit

Synopsis for "The Sun Curse!"Edit

Still in space from their last adventure, the Suicide Squad's rocket enters into a meteor storm. Somehow, the radiation off the flying debris affect the team, and they find themselves shrinking in size until they're no bigger than a thimble! With quick-thinking, they form a human pyramid so Karin can reach the control panel and switch to auto-pilot before the rocket flies out of control.

The rocket plunges into a vast lake somewhere on Earth, and the Squad is ejected out into the depths where their small size makes the fish think they're food. Rick rescues Karin from an incoming minnow while they struggle to reach the surface. Dr. Evans and Jess come across a group of docked nuclear-armed subs, each bearing a wolf insignia and appear prepped for a surprise attack on America. The four teammates regroup on the surface and find a floating matchbox they can use as a raft. Evans relates what they found to Rick, who decides that they're going to have to stop the attack themselves. A difficult task in their current size.

The Squad manages to climb onto the dock where they notice oil barrels stacked up near the lake. Rick figures that if they can spill the oil into the water they may be able to create a fire that will destroy the subs. But Jess points oiut that with their current size, it would be near impossible for them to pour the contents of the metal barrel out. Luckily, there is a soldier standing guard over a machine-gun turret. Using the same trick as before, the Squad forms a human pyramid so that Rick can grab onto the barrel, with the momentum from his jump swinging the gun around so the guard is knocked out by the butt. Moving quickly before the guard wakes up, Rick runs down the top of the barrel and makes a jump onto the trigger.

The dock lights up in flame as soldiers work to try and put it out. Another explosion rocks the waters as the submarines are destroyed one-by-one from the fire! The Suicide Squad escape back to their matchbox raft, but as they are rowing away, the box catches a stray spark and begins to burn up. Karin notices the enemy has a seaplane parked away from the blaze, making it an ideal hiding spot for the time being. But as they enter, their bodies start to get bigger. The cosmic rays they absorbed are starting to wear off! Rick is now able to reach the controls and while the others, now back to normal size, buckle up, Rick flies the seaplane up and out of danger while below, the hidden enemy base goes up in flames.

Appearing in "Serpent in the Subway!"Edit

Synopsis for "Serpent in the Subway!"Edit

When the members of Suicide Squad take a furlough to Paris, they don't expect to be attacked by a giant serpent in the subway tunnels! Bullets don't have any effect on it, and it seems able to breathe both on land and underwater. Rick comes up with an idea and orders a factory to make a giant bag of plastic. When the serpent slithers up the Eiffel Tower, the Squad flies up with the bag in a helicopter and leap, each member holding a corner, enveloping the creatures head in the bag and holding tight until it smothers to death.

Retrieved from "https://heykidscomics.fandom.com/wiki/Brave_and_the_Bold_Vol_1_26?oldid=1413900"
Community content is available under CC-BY-SA unless otherwise noted.