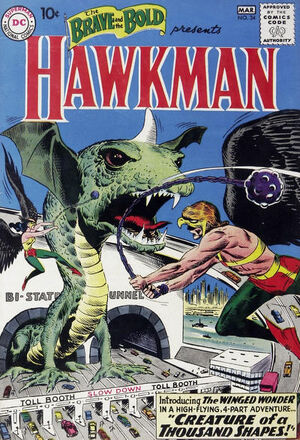 Appearing in "Creature of a Thousand Shapes!"Edit

Synopsis for "Creature of a Thousand Shapes!"Edit

Thanagarian police officers Katar and Shayera Hol travel to Earth in their space vessel in pursuit of a criminal named Byth Rok. Byth, having consumed a pill that grants him the ability to alter his shape, comes to Earth to commit bold new crimes simply for the thrill of the challenge. Katar and Shayera use the electric brain on their ship to learn about Earth's cultures and languages. Landing in Midway City, they introduce themselves to Midway's police commissioner George Emmett. Emmett is fascinated by the fact that they are alien police officers and uses his influence to provide them with Earth identities. Katar and Shayera take the names Carter and Shiera Hall and become the new curators for the Midway City Museum. As curators they meet one of the Museum's patrons, naturalist Mavis Trent. Mavis is instantly attracted to Carter Hall and persists in trying to charm him despite the fact that he is already married. They also meet the Museum's press agent Joe Tracy.

Byth meanwhile, uses his shape-shifting talents to commit a string of thefts. He soon discovers that Katar and Shayera are on Earth and are looking to bring him in. When their paths finally cross, Byth assumes the shape of a Thanagarian Kasta Bird and attacks them. They trap him inside of a throwing net, but Byth changes shape again and transforms into a fly that slips through the interstices of the net.

Later, Byth decides to rob the Bi-State Tunnel. Not satisfied with merely stealing money, he decides to steal the entire tunnel itself. Transforming into a giant Thanagarian Brontadon, he crawls through the tunnel and begins wreaking havoc. Katar and Shayera engage him in battle and eventually subdue him by striking at the Brontadon's twin brains simultaneously. Once captured, Byth returns to his normal form whereupon he is placed inside of a hibernation chamber and rocketed back to Thanagar.

Retrieved from "https://heykidscomics.fandom.com/wiki/Brave_and_the_Bold_Vol_1_34?oldid=1500007"
Community content is available under CC-BY-SA unless otherwise noted.