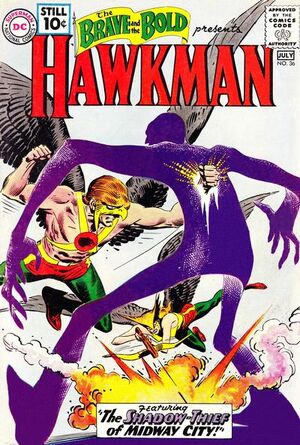 Appearing in "Strange Spells of the Sorcerer!"Edit

Synopsis for "Strange Spells of the Sorcerer!"Edit

At the Midway City Museum, Mavis Trent and her colleague Konrad Koslak are studying artifacts from the Chaldean empire when they are attacked by a mystical winged buffalo.

In his secret room inside the museum, Hawkman hears the commotion and goes to the rescue. When he attacks the winged creature, it disappears in a puff of smoke. In the aftermath of the battle, Hawkman and Hawkgirl decide to go to Hawk Valley and learn what they can from their birds to see if they know what may have caused things.

Arriving in the valley, they are attacked by the Phoenix bird of myth, it too disappears when they attack it. They also find during the attack that one of the birds that lives in the valley had its eggs stolen. Deducing that someone could possibly be getting items for a spell, they check in with Konrad Koslak to see what he can tell them. He informs them of an ancient Chaldean spell that would require a yellow egg, a gold sword (Which they find was stolen in the previous attack in the museum) a Chrysoberyl gem.

When they learn that Mavis, who had a Cat's Eye gem on her ring, they realize that Konrad Koslak is the one responsible for stealing these items and is intending to cast the spell. Rushing to his home, they find that he's already used the spells to create real mythical creatures. However, Hawkman and Hawkgirl easily defeat them all, and capture Konrad Koslak and turn him over to the police. Hawkman then personally returns Mavis her ring.

Midway City is plagued by a series of robberies by a new super-powered criminal known as the Shadow Thief. The authorities have a hard time capturing him because it's almost as though the Thief is a real shadow. Even when Hawkman and Hawkgirl try to stop him from robbing, but they manage to take pictures for their future reference.

The Thief returns to his trailer outside of town where we learn that he's really a criminal named Carl Sands, who had become obsessed with shadows once after he was arrested for robbery. Once he was released from prison he turned his obsession into a quest to learn how to literally become a shadow to further his own criminal ends. As fate would have it, one of his experiments allowed him to contact with a creature from another dimension who was trapped. With Sand's help the alien was freed and as thanks, the alien gave Sands a device called a dimensionometer to allow him to exist in both dimensions simultaneously and become a shadow on Earth.

Sands used the device to commit fantastic crimes, ignoring the warnings from the alien that further use of the dimensiometer would cause Earth to undergo another Ice Age.

Meanwhile, Hawkman and Hawkgirl have used their photographs to successfully learn Sand's true identity and come up with a plan to capture him. Going to his trailer, they secretly lift it high into the air before alerting Sands that they intend to capture him. As expected, Sands turns on the dimensiometer and dives out the door, only to find that he's thousands of feet up in the air and is at risk of falling to his doom. Unable to be rescued unless he turns off his dimensionmeter, Sands turns it off and tosses the device to Hawkgirl so that he may be save. He is then turned over to the authorities and Hawkman and Hawkgirl decide to keep the device in their museum.

Retrieved from "https://heykidscomics.fandom.com/wiki/Brave_and_the_Bold_Vol_1_36?oldid=1413910"
Community content is available under CC-BY-SA unless otherwise noted.