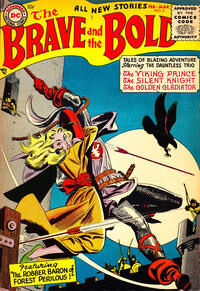 Brian stood in the courtyard watching, with his knight tutor, Grot, as Sir Edwin tried to tame his newest steed! After he is thrown off, Edwin grabs his crossbow and aims it at the beast, shouting that it's bewitched! Brian rushes over between the steed and the arrow, Edwin holds his fire as the lad climbs on the horse and hangs on tight. The animal bucks and twists and turns, but Brian holds on until, at last, the horse grows tired. Sir Edwin is very impressed, and remarks that Jon could finally be ready to sit beside him on the throne. Sir Grot interjects at that moment and suggests that he not judge Brian based on one 'accident' where the horse probably just fell asleep. As if to emphasize Grot's point, the horse suddenly jolts and Brian is knocked off. Celia rushes to Brian's aid as Grot and Sir Edwin share a laugh at his expense.

Days later, soldiers return from the Forest Perilous to report that the jewels they were guarding for Sir Edwin had been stolen by the Robber Baron! The following day, Celia mounts her steed, prepared to travel to the dance being held at sir Ronald's castle. She bids Brian farewell, telling him she'd like to talk more about his eyes when she returns, and she'll try to remember where she's seen eyes like his before. As soon as she is gone, Brian overhears Edwin's laughter, he decides to eavesdrop, and learns that the stolen jewels were fakes designed to throw off any thieves, the real jewels will be transported with the unknowing lady Celia. This information gives Brian a bad feeling, as Celia had left with only a handmaiden and no bodyguards. He sneaks out of the castle with Slasher the hawk, and makes his way into the forest to don his Silent Knight guise. Once dressed, the Silent Knight comes across Celia's handmaiden, on her own and in distress. Lady Celia has been taken by the Robber Baron to his castle!

It's just a matter of following Slasher, with his keen senses, to find the Baron's hidden keep. Luckily, there were vines growing on the castle wall that the Silent Knight could use to climb up and avoid any guards. Through one of the high windows he sees Celia, being held by the Baron, who gloats with the bag of jewels, repeatedly tossing it up in the air. The Silent Knight nabs the bag from his window perch during one of the tosses. The Baron's archers fire their arrows and the knight seemingly falls to his doom. In actuality, he had managed to hang on to one of the vines below, and once the Baron and his men leave the room, he again appears at the window sill to rescue Celia. She holds on tight, her arms around his neck, as he climbs back down, never speaking a word to her. He unsaddles one of the Baron's guards and together with Celia, rides the horse back home.

Later in the day, Brian sits in the stables bathing one of Sir Edwin's horses with Lady Celia watching. She seems to think he reminds her of someone, though she knows not who.

Appearing in "The Whirling Warriors!"Edit

Synopsis for "The Whirling Warriors!"Edit

During a yearly festival in the fishing village, Gunnda is named Queen of the celebration for being the most fair maiden that year. A contest between two men, the Viking Prince Jon, and Toke the red-bearded, begins for the privilege to dance with the fair Gunnda! The first challenge is to climb a sea-lashed cliff and retrieve the egg of the black fern, a rare bird. As Jon is nearing the nest where the egg lies, he is struck by a falling bit of rock and loses his grip, plummeting into the sea below! Before he submerges completely, Jon noticed Toke was standing on the ledge above where the rock had come from. In the water, he is attacked by a giant sea otter the villagers have named "Trukka". Jon manages to defeat Trukka, but Toke has already returned to the beach with the egg, winning the first challenge.

In the second challenge, they must scale the snowy peaks and bring back a blue snow flower that grows atop. Gunnda gives Jon her cloak, to keep him warm and safe. She wishes for him to win the contest, for she doesn't want to dance with anyone else. On the peaks, Toke is further along though he stops long enough to send a rolling ball of snow down towards the viking prince, hindering his progress. By the time Jon is able to dig his way out, Toke has already picked a flower and now makes his way back down via the skis he wore. Jon finds a flower and, with Gunnda's cloak, forms a makeshift sail to help him beat Toke down the mountain!

The score now tied, village chief Olaf gives the last challenge. Armed with their favored weapons, Jon and Toke are tied at the waist by a rope, wrapped around a pole until they are both swinging, and attempt to cut each other's rope to make them fall. Toke brandishes his war-axe and takes a swing directly at Jon! The viking prince manages to hold up his sword just in time, but the axe cuts it in half! As the villain swings around for another blow, Jon uses his free hand to pull himself up higher on his rope, both dodging Toke's murderous attack, and cutting the rope that held him! Jon is the winner of the contest! The musicians begin to play, as Jon and Gunnda happily dance together as the festival draws to a close.

Caius was a ruthless collector of all things gold. From stolen gold sculptures, to a gold-colored steed whose rider met an unfortunate "accident". But his collection isn't complete as the devious Cinna tells him, the greatest warrior in Rome, the Golden Gladiator is not yet his.

In the arena, Marcus fights against his latest challenger, as Cinna and Caius watch. He defeats his opponent and walks over to Lucia, Cinna's lovely daughter, and tosses his laurel wreath to her. Impressed, Caius agrees that his collection won't be complete until Marcus, the Golden Gladiator, is in his possession. A few days later, Marcus travels to the pine grove after recieving a note from Lucia to meet her there. It is actually a trap set by Caius, who throws a net around Marcus while his hired thugs beat him into unconciousness.

When he awakens, Marcus finds himself in a hidden arena, with Caius watching over him from the box seat. He has Lucia with him and says if Marcus doesn't fight for him, she will suffer for it. The contender is a two-man chariot team with one wielding a battleaxe . Lucia calls the fight unfair since Marcus is onfoot armed only with a sword, but Caius replies that if he is the Gladiator King, it should be his duty to "defend his throne", and that if he is not the best then he has no place in his collection and should be destroyed. Marcus strikes with his sword, but one of the riders counters, cutting the blade in two with his axe! As the horses are brought around again, Marcus readies himself. He grabs the horses by their front reigns and with his strength, steers them around until the attached chariot overturns, dumping the riders out. Marcus then rights the chariot and drives it near the box so that Lucia can hop in and escape with him. Against Caius' screams of rage, Marcus crashes the chariot through the gates and manages to dodge the arrows of the archers. He and Lucia then make their way back to Rome...