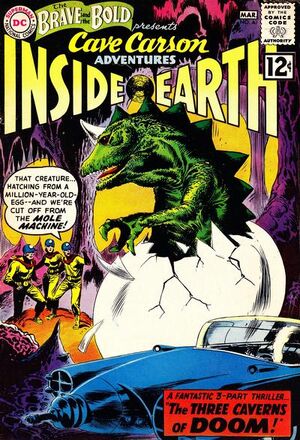 Appearing in "Three Caverns of Doom"Edit

Synopsis for "Three Caverns of Doom"Edit

A magic crystal, created by an ancient sorceror, is found by a man named Zenod, who uses it's power for his own evil purposes. Two more crystals remain hidden underground, and Cave Carson and his friends are going to do whatever it takes to stop Zenod from retrieving the whole set!

Retrieved from "https://heykidscomics.fandom.com/wiki/Brave_and_the_Bold_Vol_1_40?oldid=1413914"
Community content is available under CC-BY-SA unless otherwise noted.