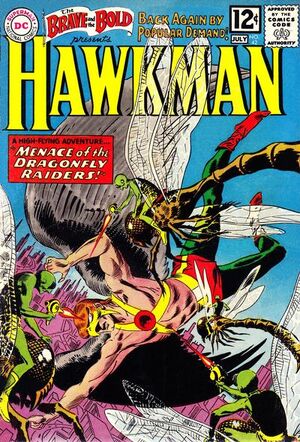 Now that we've learned Earth police tactics, I can hardly wait to test them out here on Thanagar!

Appearing in "The Menace of the Dragonfly Raiders"Edit

Synopsis for "The Menace of the Dragonfly Raiders"Edit

Hawkman and Hawkgirl return to their home planet of Thanagar where they meet with police chief Andar Pul. After taking some time to relax, they realize that their efforts are still needed as a group known as the Dragonfly Raiders begin pulling off a series of daring robberies. The Hawks engage the Dragonfly Raiders and manage to capture a few of their pilots. They soon discover however that the riders are little more than android robots. To make matters worse, they also discover that their old foe Byth Rok has recently escaped from prison. It doesn't take long before the Hawks realize that there is a connection between Byth and the Dragonfly Raiders. Hawkman decides to use a valuable Gem Tree in an effort to bait Byth into a trap. Byth is too clever to fall for it however, and uses a Trance-Ray to distract the Hawks so that he can steal the stones from the Gem Tree. Hawkman and Hawkgirl later track Byth and his cronies to a cave near the Sea of Scythia. All of Byth's fellow thrill-thieves have taken Krotan's Changeling Pill and now possess the ability to shape-shift into any known animal. Hawkgirl takes out two of his confederates while Hawkman engages Byth directly. He succeeds in defeating him and Byth is taken back to prison.

Retrieved from "https://heykidscomics.fandom.com/wiki/Brave_and_the_Bold_Vol_1_42?oldid=1413916"
Community content is available under CC-BY-SA unless otherwise noted.