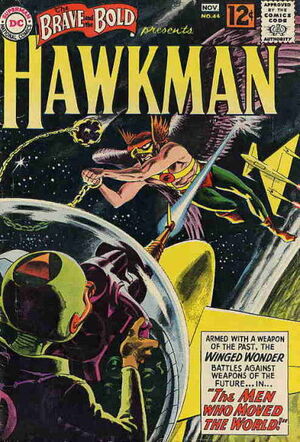 It's July 4th and as everyone in Midway City celebrates Independence Day, Shiera Hall is sad because this is the same date as the Thanagarian holiday of Impossible Day. Carter tries to cheer her up by suggesting that in celebration of Impossible Day, they should go out as Hawkman and Hawkgirl and have a picnic, and try and pull off some impossible tasks.

Sure enough, when they are having their picnic, they become aware of a forest fire, and use their wings to create a waterspout from a nearby body of water to put out the flames. Next, a bunch of crooks who have rigged their getaway car with some kind of force field are stopped by Hawkman and Hawkgirl, who find fragments of Fulgurite to throw at the vehicle. Upon impact the Fulgurite would create lightning at that ultimately immobilizes the vehicle allowing the authorities to arrest the crooks inside.

Appearing in "The Men Who Moved the World!"Edit

Synopsis for "The Men Who Moved the World!"Edit

Working late into the night examining an ancient shield that has no historical background, Carter Hall is surprised when three animal headed creatures appear in the museum to steal the very item he's researching. The creatures manage to get away with the shield thanks to their high tech weapons.

The next day as Carter tells Shiera about the incident, the planet suddenly loses all gravity. Believing that it must be the strange creatures he encountered, the two decide to go out as Hawkman and Hawkgirl to the only lead they have in this strange case: The original site where the shield was found.

Sure enough, the creatures, a species of animal people that predated humans, are at this location using the shield to power a device to move the Earth into a more suitable distance from the sun so that they may survive on Earth and reclaim their dominance. It's soon getting to the point where the process will not be able to be reversed.

During the fight, the creatures are defeated however they ultimately believe that they have the upper hand as the planet had shifted beyond the point of no return. However, Hawkman is still able to reverse the planets shifting position. He then points out to the aliens the one flaw they had in their plan: They got humans time measurement system confused with their own.

Retrieved from "https://heykidscomics.fandom.com/wiki/Brave_and_the_Bold_Vol_1_44?oldid=1413918"
Community content is available under CC-BY-SA unless otherwise noted.