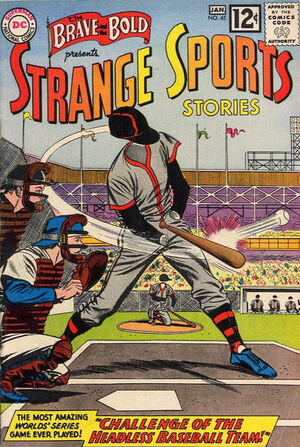 Appearing in "Challenge of the Headless Baseball Team!"Edit

Synopsis for "Challenge of the Headless Baseball Team!"Edit

An alien race comes down to Earth to challenge the New York Jets baseball team to a game. Lefty Clark, the star pitcher, must prevent them from winning the pendant and the object of power hidden within.

Appearing in "Goliath of the Gridiron!"Edit

Synopsis for "Goliath of the Gridiron!"Edit

Jim Spencer was a weak, stringy young man who one day discovered the small plant he had been taking care of had grown unnaturally bigger. Tasting some of the berries grown from the plant, Jim soon becomes stronger and faster, allowing him to become the star quarterback of the Campus team, and also winning the girl of his dreams.