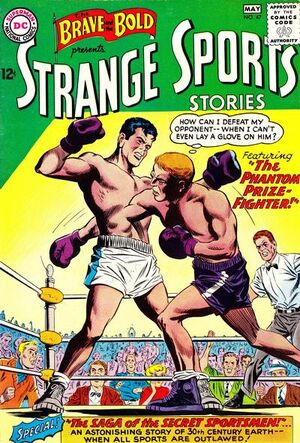 Appearing in "The Phantom Prizefighter!"Edit

Synopsis for "The Phantom Prizefighter!"Edit

"Socko" was an amateur boxing champ who dreamed of becoming good enough to make it into the championship league. An alien in a crashed starship grants him his wish, but it comes with a high price...

Appearing in "Saga of the Secret Sportsmen!"Edit

Synopsis for "Saga of the Secret Sportsmen!"Edit

The world of the 30th Century has embraced a laid-back lifestyle, thanks largely to an invention called the Sportscaster, which lets the user play virtual sport games from the comfort of their own home. Real sports, in fact, have been outlawed all together for the danger of being too physical. But beings from Uranus have begun an invasion of Earth, and only a secret organization of real sports-lovers have the will to stop them.

Retrieved from "https://heykidscomics.fandom.com/wiki/Brave_and_the_Bold_Vol_1_47?oldid=1413921"
Community content is available under CC-BY-SA unless otherwise noted.