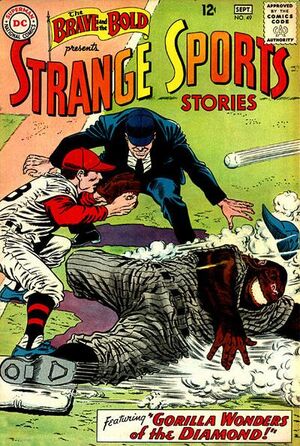 Appearing in "Gorilla Wonders of the Diamond!"Edit

Synopsis for "Gorilla Wonders of the Diamond!"Edit

As an experiment, John Emerson give the gorillas of Africa a special formula to help their minds evolve. They soon learn to talk and build their own inventions, and soon become interested in baseball. But is their desire to play across the USA baseball league all for sport, or do they have something more sinister in mind?

Appearing in "Warrior of the Weightless World!"Edit

Synopsis for "Warrior of the Weightless World!"Edit

Spaceball was a new sport of the future, combining zero-gravity with basketball. Cray Duncan was a great player, but he didn't really like the game. When war broke out between Earth and the Creon Empire, Cray enlisted himself to fight. Little did he know that his knowledge and expert abilities in Spaceball would help the army win the war...

Retrieved from "https://heykidscomics.fandom.com/wiki/Brave_and_the_Bold_Vol_1_49?oldid=1413923"
Community content is available under CC-BY-SA unless otherwise noted.