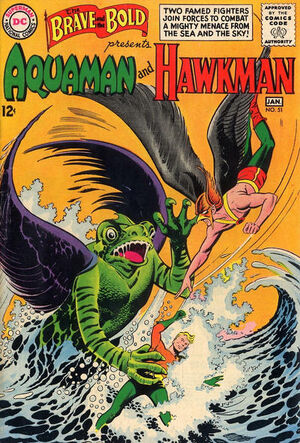 Appearing in "Fury Of The Exiled Creature"Edit

Synopsis for "Fury Of The Exiled Creature"Edit

Atlantis is attacked by sea creatures, sending Aquaman and Aqualad to the rescue of their fellow Atlanteans. Aquaman is surprised to find that his ability to communicate with sea creatures has no effect. However, he still manages to fight off the attacking sea creatures, who eventually flee. What Aquaman is unaware of is that this was instigated by Tyros, an Atlantean exile who had been transformed into an amphibian/bird hybrid who is bent on getting revenge against the people of Atlantis.

Tyros then begins plan B: stealing the Quixtol's sacred pipe, an ancient Aztec flute which gives it's user control over birds. This theft gets the attention of Hawkman and Hawkgirl who go out and try to recover the pipe. While deep under the ocean, Aquaman and Aqualad visit the Old Man of the Oceans, who reveals to them that Tyros is the one responsible for the attack.

As Tyros battles Hawkman and Hawkgirl on the surface with an army of birds (capturing Hawkgirl in the process), he sends a wave of sea creatures to attack Atlantis and deliver a message: surrender Atlantis to him, or die. Fleeing the battle, Tyros takes Hawkgirl to the cave which contains the crystal that transformed him into the creature he now is. He uses it to turn Hawkgirl into a harpy and sends her out to attack Hawkman.

After Aquaman and Aqualad are seemingly killed in an explosion while trying to stop Tyros, Tyros takes the opportunity to finally seize Atlantis for himself. Hawkman however, manages to defeat the harpy-Hawkgirl by using a bird brought to Earth from Thanagar, who is unaffected by the horn. While Aquaman and Aqualad drain Atlantis of its water, rendering Tyros' underwater allies useless, Hawkman attacks Tyros with an army of birds. In all the commotion, Aquaman smashes the gem that gave Tyros his powers. Once destroyed, Tyros changes back to normal and is put into custody, likewise Hawkgirl is also reverted to normal. After their battle, Hawkman and Aquaman part company and thank each other for the help.

Retrieved from "https://heykidscomics.fandom.com/wiki/Brave_and_the_Bold_Vol_1_51?oldid=1413925"
Community content is available under CC-BY-SA unless otherwise noted.