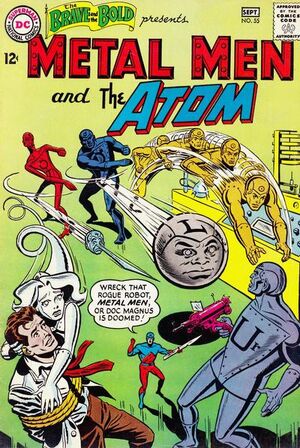 Appearing in "Revenge of the Robot Reject"Edit

Synopsis for "Revenge of the Robot Reject"Edit

When the Metal Men are destroyed by the machinations of Dr. Will Magnus's first robot, Uranium, and his silver girlfriend Agantha, both of whom imprison him in his lab, Magnus sends an SOS to the Atom, who makes a desperate attempt to reconstruct the heroic robots.

Retrieved from "https://heykidscomics.fandom.com/wiki/Brave_and_the_Bold_Vol_1_55?oldid=1413929"
Community content is available under CC-BY-SA unless otherwise noted.