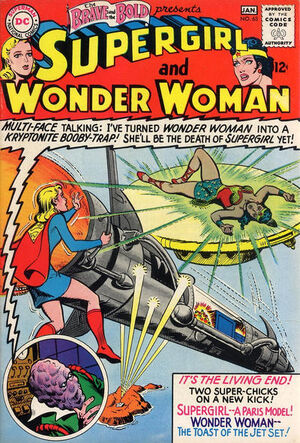 Appearing in "The Revolt Of The Super-Chicks"Edit

Synopsis for "The Revolt Of The Super-Chicks"Edit

When Supergirl rescues a movie actress and sees the movie crew attending to her every little need, she decides to quit being a heroine and search for romance and glamor as a Paris model. Superman makes no headway in persuading her to return to heroics, so he asks Wonder Woman to plead in his behalf. But, when Wonder Woman tracks Supergirl down at a fashion show, she finds the Girl of Steel with a new lover, Henri, and is soon romanced herself by Andre, Count de Tour. Both super-heroines are on vacation at the Isle of Love with their new swains. Unfortunately, the Isle is also the home base of Multi-Face, a super-villain who can change his facial features at will. Multi-Face attempts to destroy both heroines to save his operation. Supergirl and Wonder Woman prevail, and both realize they cannot give up their heroic careers.

Retrieved from "https://heykidscomics.fandom.com/wiki/Brave_and_the_Bold_Vol_1_63?oldid=1413937"
Community content is available under CC-BY-SA unless otherwise noted.