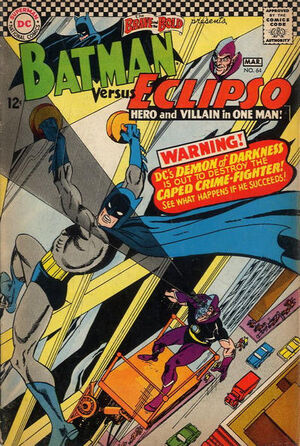 Appearing in "Batman Versus Eclipso"Edit

Synopsis for "Batman Versus Eclipso"Edit

Falling for rich playgirl Marcia Monroe, Batman gets caught up in a plot to steal the priceless emerald cat jewel stolen by the CYCLOPS organization. Framed for the theft of the jewel, Batman is arrested and jailed, giving the CYCLOPS organization and their operative the Queen Bee the opportunity to capture Eclipso just as he emerges from his host Bruce Gordon.

While Eclipso is used to make a heist, Batman manages to break out of prison and with the help of Bruce Gordon, defeats Eclipso (shunting the villain back into Gordon's body) and toppling CYCLOPS' plan. Although Batman manages to identify that Marcia Monroe was really Queen Bee, she manages to get away, however Batman vows that one day she will have to answer to her crimes.

Retrieved from "https://heykidscomics.fandom.com/wiki/Brave_and_the_Bold_Vol_1_64?oldid=1413938"
Community content is available under CC-BY-SA unless otherwise noted.