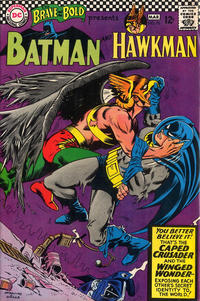 When rich man dubbed the "collector" (for his obvious obsession with collecting valuable objects) boasts his next priceless collection will be the secret identities of super-heroes, local hero Batman is his first target. Using a power computer of his own design to deduce the identity of the hero, the machine tells him that Batman is really Bruce Wayne. The Collector then sets out a series of crimes in which the crooks primary objective is to collect enough forensic evidence to prove that Batman is really Bruce Wayne.

Deducing the Collectors plot (but not his identity), Batman seeks the aid of Carter Hall (AKA Hawkman) who is in Gotham City for a museum exhibition in his civilian guise to help throw off the crook. Staging a battle between themselves, Batman and Hawkman trick the Collector into believing Hawkman is really Bruce Wayne and Batman is really Carter Hall to draw him out into the open. Captured, the Collector is then further led to believe that Bruce Wayne is really an alien, and Carter Hall really a criminal who changed his name to further throw off the Collector from the truth. Lock in prison, the Collector then boasts that he knows the "true" identity of Batman and Hawkman to all the crooks he made privy to his previous deductions.

Retrieved from "https://heykidscomics.fandom.com/wiki/Brave_and_the_Bold_Vol_1_70?oldid=1413944"
Community content is available under CC-BY-SA unless otherwise noted.