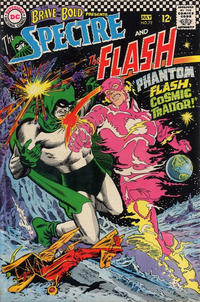 The Spectre must stop the ghost of a fallen World War I ace from taking revenge on his old squadron members, even though his opponent has turned the Flash into a ghostly being and bent him to his will.

Retrieved from "https://heykidscomics.fandom.com/wiki/Brave_and_the_Bold_Vol_1_72?oldid=1413946"
Community content is available under CC-BY-SA unless otherwise noted.