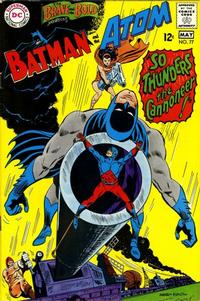 Appearing in "So Thunders the Cannoner!"Edit

Synopsis for "So Thunders the Cannoner!"Edit

When a train full of priceless artwork is replaced with forgeries by the Cannoner, Batman goes on a quest to find who stole the priceless works, and enlists the aid of the Atom. The Cannoner, meanwhile has tricked circus midget Lilli De La Pooche to take a shrinking pill that shrinks her down to three inches and blackmails her into helping him stash the artwork until the heroes are thrown off.

Retrieved from "https://heykidscomics.fandom.com/wiki/Brave_and_the_Bold_Vol_1_77?oldid=1413951"
Community content is available under CC-BY-SA unless otherwise noted.