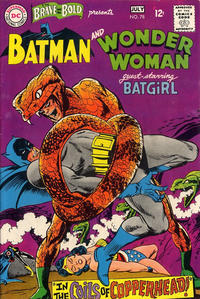 Enough, you two! I've had enough! You've ruined everything with your kooky romanticism!

Appearing in "In the Coils of Copperhead"Edit

Synopsis for "In the Coils of Copperhead"Edit

While Batman is otherwise busy stopping crooks making off with an armored truck, the evil Copperhead has disguised himself as a poor man in order to get close enough to a visiting monarch in order to steal her tiara. When Batman finally tries to stop Copperhead he is too late. With his reputation on the line, Batman vows to somehow deal with Copperhead.

Devising a plan, Batman sets up an electronic beam alarm to protect the Golden Casque of Montezuma. However, as he is setting this up, both Wonder Woman and Batgirl appear over the city writing messages of love to Batman before getting into a scrap over who is worthy of the Caped Crusaders affections. Stopping the two from quarreling they both agree to a contest to decide which of the two are worthy of Batman's love. As the event is televised Copperhead figures this is the best time to strike.

While the two women try to win Batman's favor with various gifts, Copperhead sends up a common hood to check out the alarm to see if Batman is faking. When the first attempt doesn't cause Batman to run to the scene of the crime, Copperhead realizes that it's probably safe to steal the casque since Batman is otherwise predisposed. However, when Copperhead goes to steal it, it turns out that the whole spectacle put on by Wonder Woman and Batgirl was all a ruse organized by Batman to get Copperhead to come out of hiding.

When the next attempt to capture Copperhead fails, Batgirl and Wonder Woman both realize that they're really in love with Batman which starts the whole argument all over again. When the two leave their secret identities hidden in Gotham Park for Batman to find, Copperhead learns of the location and seeks to get the identities himself, but ends up capturing Wonder Woman instead. Tracking Copperhead to his lair, Batman and Batgirl manage to find him and after battling the foe, they defeat him. The women then reconcile their feelings for Batman and depart after Copperhead is turned over to the police.

Retrieved from "https://heykidscomics.fandom.com/wiki/Brave_and_the_Bold_Vol_1_78?oldid=1512379"
Community content is available under CC-BY-SA unless otherwise noted.