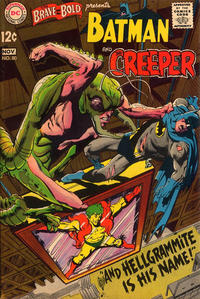 Newsman Jack Ryder (secretly the Creeper) approaches Batman with information that the criminal Hellgrammite is in Gotham City. This revelation leads to Batman and the Creeper working together to stop the mammoth crook from his bid to eliminate prominent gang members.

Battling the Hellgrammite throughout Gotham, the duo locate him in the Gotham subway system where they down Hellgrammite with a combination of a fire extinguisher and the electrified third rail. After the Hellgrammite's defeat, the Creeper makes his escape to avoid his own arrest at the hands of the Gotham PD.

Retrieved from "https://heykidscomics.fandom.com/wiki/Brave_and_the_Bold_Vol_1_80?oldid=1506521"
Community content is available under CC-BY-SA unless otherwise noted.