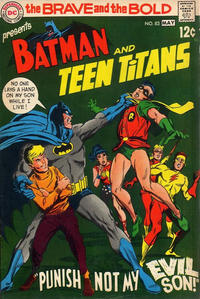 Appearing in "Punish Not My Evil Son"Edit

Synopsis for "Punish Not My Evil Son"Edit

During a board meeting of the Zenith Oil Corporation leaves Bruce Wayne suspicious about millions of gallons of oil being stolen, he and Robin investigate the plant to find that an elaborate theft scheme is being orchestrated to steal the oil. The next day, Bruce and Dick are surprised by the arrival of Lance Bruner, the son of the late Professor Bruner, one of Bruce's fathers closest friends. Under an agreement, Bruce promised to be ward for the boy should the professor die.

Taking Lance in proves to be quite the headache as the boy is trouble, causing untold damage to the Wayne property and making fake ransom notes. Dick tries to cover for Lance at first and tries to help him make friends by means of the Teen Titans in their civilian guises, while at night Batman and the Teen Titans try to find out the source of the oil thefts.

Finally caught after his ransom act, Lance stumbles upon the Batcave and vows to get revenge on the Dynamic Duo and sets them up for an ambush when he tells Zenith Oil owner Stark (Really the mastermind behind the thefts) of Batman and the Titan's next move, leading the group to be captured. Realizing that Stark intended to kill them, Lance realizes the error of his ways and sets the heroes free. During the fight Lance (disguised as Robin) sacrifices his life trying to stop Stark, who is quickly defeated by the angered heroes who think that it was Dick who was killed. Afterwards, Bruce puts up a memorial remembering Lance on the property of Wayne Manor.

Retrieved from "https://heykidscomics.fandom.com/wiki/Brave_and_the_Bold_Vol_1_83?oldid=1413957"
Community content is available under CC-BY-SA unless otherwise noted.