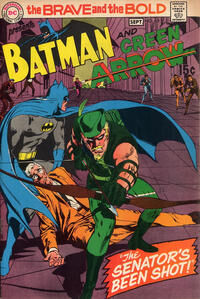 I hereby accept the office of United States Senator.

Appearing in "The Senator's Been Shot!"Edit

Synopsis for "The Senator's Been Shot!"Edit

When the newly voted senator for Gotham City is shot before he can vote on a important anti-crime bill, Bruce Wayne is selected to finish the rest of the Senator's term during his recovery so that the crucial deciding vote for the bill be made. Meanwhile, as Batman, Bruce attempts to find out who was responsible for having the senator shot and along the way teams up with the Green Arrow to bring the shooter to justice, just in time for Bruce to vote in favor of the crime bill.

Retrieved from "https://heykidscomics.fandom.com/wiki/Brave_and_the_Bold_Vol_1_85?oldid=1413959"
Community content is available under CC-BY-SA unless otherwise noted.