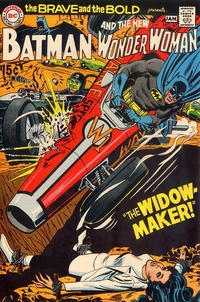 When Willi Van Dort (son of the Nazi war criminal General Van Dort) plans to use unsportsmanlike means to win a race by having Bruce Wayne attacked, Batman enters the race, and with the held of Wonder Woman and I-Ching wins the race instead of Van Dort, who was willing to win by any means, even murdering Batman. The plot is foiled with the help of Wonder Woman, Batman wins the race and Van Dort and his accomplices are arrested. Wonder Woman also gets into some trouble with the law when it turns out the car she thought was a rental was the wrong one and was reported stolen.

Retrieved from "https://heykidscomics.fandom.com/wiki/Brave_and_the_Bold_Vol_1_87?oldid=1413961"
Community content is available under CC-BY-SA unless otherwise noted.