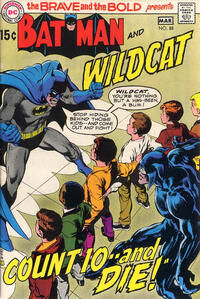 Appearing in "Count to Ten... And Die!"Edit

Synopsis for "Count to Ten... And Die!"Edit

When Bruce Wayne hires retired boxer Ted Grant to coach the US Team that will be competing in the World Youth Games in Vienna, Austria, Bruce helps bring a new sense of pride in the down-and-out former boxer. As Bruce aids the Anglo-American Military Intelligence to stop the selling of information to Russians as Batman, Ted is challenged by the Russian World Youth Coach, Koslov, the Hammer -a former boxing opponent of Ted -- to a boxing match to determine which nation has the best fighter.

Later, during the boxing match, Ted manages to defeat his Koslov in the ring, while Batman manages to nab the informant and his buyer and turn them over to the authorities. After, Ted and Bruce enjoy the rest of the World Youth Games, Ted with a restored sense of worth for himself, and potentially Wildcat as well.

Retrieved from "https://heykidscomics.fandom.com/wiki/Brave_and_the_Bold_Vol_1_88?oldid=1413962"
Community content is available under CC-BY-SA unless otherwise noted.