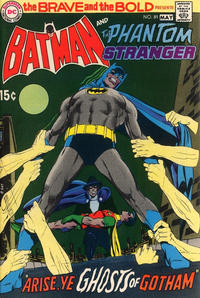 Gotham City is visited by a religious group called the Hellerites, a group of people who centuries ago owned the land that later became known as Gotham City. The forefathers of Gotham had forced the Hellerties out off the land, and now they have returned with their apparent messiah and founder Josiah Heller was prophesied to come back and threaten to turn Gotham City into a desert unless the land was turned over to his people.

When the Hellerites arrive in town, Commissioner Gordon asks Batman to look into the matter as the Hellerties start trying to take claim of the city. As Bruce Wayne, owner of most of the property in Gotham City, Batman turns land that he personally owns over to Heller, while as the Caped Crusader he investigates the group.

As Batman is attacked in his home by a possessed Dick Grayson, Batman soon learns that there are actually two Josiah's, one of them the ghost of the real Josiah, who is raising the ghost of the dead Hellerites to haunt Gotham City, and a phony trying to cash in on the Hellerite curse. Batman revives the Phantom Stranger, and with his help they expose the fake as con-man Karl Loftus. With the truth revealed and Loftus remembering who is and admitting his identity, the ghost of Josiah and the Hellerites return to their eternal rest.

Retrieved from "https://heykidscomics.fandom.com/wiki/Brave_and_the_Bold_Vol_1_89?oldid=1413963"
Community content is available under CC-BY-SA unless otherwise noted.