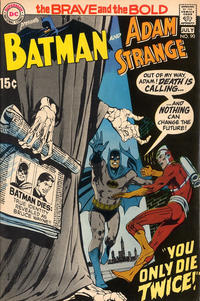 Appearing in "You Only Die Twice!"Edit

Synopsis for "You Only Die Twice!"Edit

After a near death experience, Batman is visited by Adam Strange, who explains to him that after a freak accident involving the Zeta-Beam, Adam was transported to Earth at sometime in the future and found Batman's obituary. However, as Adam grabbed for the newspaper, he was transported back to modern day Rann, only taking part of the obituary with him, so that the year of Batman's death is unknown.

Giving this information to Batman leads the caped crusader to become paranoid of his coming demise, and leaves Earth with Adam Strange in the middle of solving a crime involving a contracting scheme and contractor Mike Morrison. However, when viewing Gotham City via a machine on Rann, Batman observes Alfred being taken hostage by the mob over gambling debts. Snapping out of his paranoid, Batman returns to Earth with Adam Strange and the duo travel to Liberty Island where they rescue Alfred and break up the crime syndicate. Batman finally resolves that he will no longer run from his fated demise, whatever and whenever that may be.

Retrieved from "https://heykidscomics.fandom.com/wiki/Brave_and_the_Bold_Vol_1_90?oldid=1413964"
Community content is available under CC-BY-SA unless otherwise noted.