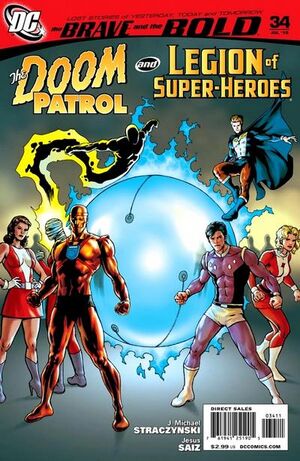 Appearing in "Out of Time: Part One of Two"Edit

Synopsis for "Out of Time: Part One of Two"Edit

Lightning Lad discovers a small black hole on a collision course with Earth. They head back in time to recruit help. After they've explained the situation to the Doom Patrol, they head into the Timestream and travel back to the future. After almost not making it to the future due to a sabatoging pink-fluff that was found in the Time Bubble, which also had mysteriously moved several times. Once in the future, the teams work together and overload the black hole, forcing it to put out more than it absorbs and thus breaking down into nothingness. They then return to the past to drop off the Doom Patrol. Once there, The Chief informs the Doom Patrol that he has had the worst day ever.

Part 2 appears in the next issue.

It should be noted that Saturn Girl and Elasti-Girl have amazingly similar costumes.

Retrieved from "https://heykidscomics.fandom.com/wiki/Brave_and_the_Bold_Vol_3_34?oldid=1414124"
Community content is available under CC-BY-SA unless otherwise noted.