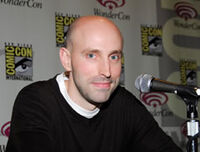 Vaughan has written for most of the major DC and Marvel characters, including Batman and the X-Men. He has also written several screenplays, stage plays, and short stories, but mostly he prefers writing comic books. He has stated in an interview with Wizarduniverse.com[1] that he prefers to write his own creations like Y: The Last Man and Ex Machina because he doesn't think he's the best at using his "voice" with company-owned characters. Vaughan was hired in late 2006 as an executive story editor for the television series Lost.[2]